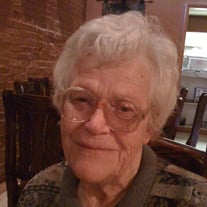 WILOVEN BASHLINE LOGUE, 95, of West Freedom, Parker, Pa. passed away Tuesday evening (07-05-16) at Beechwood Homes, Getzville, NY. following a period of declining health. Born in Emlenton, Pa. on August 12, 1920, she was daughter of the late Reldon and Hazel Brock Bashline. Protestant by faith, Wiloven worked as partner with her late husband in the operation of Logue’s Service Station and TV Repair in West Freedom for many years. She is survived by daughter-in-law, Joelle Logue of Williamsville, NY;  three grandsons:  Christopher (Andrea) Logue and Nicolas (Taurie) Logue and Tim logue; two great-grandchildren: Grace and Luke Logue. In addition to her parents, she was preceded in death by her husband, C. Albert Logue who passed away in 1988.  Wiloven was also preceded in death by her only son, Dr. Gerald “Jerry” Logue who passed away just thirteen months ago on June 7, 2015, and more recently by her sister, Ella Mae Craig.   Friends may call from Noon to 2:00 PM Monday (07-11) at H. Jack Buzard Funeral Home, 201 So. Wayne Ave., Parker.  Funeral services will then be held at 2:00 PM in funeral home, with interment immediately to follow at Big Bend Cemetery near Emlenton. In lieu of flowers, the family suggests memorials in her honor to the Perry Twp. Historical Society, %Kay Caldwell of Dutch Hill, Parker, Pa.  16049.

The family of Wiloven (Bashline) Logue created this Life Tributes page to make it easy to share your memories.

Send flowers to the Logue family.