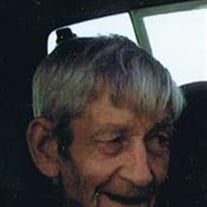 William A. Wolfe, 81, of Parker, Pa., passed away Sunday (09/18/2011) at UPMC Northwest in Cranberry,Pa after an extended illness. Born on April 9, 1930 in Butler, Pa., he was the son of the late Glenn and Garnet Fleeger Wolfe. Bill was married to Patricia Horner Wolfe in 1975 who survives. Mr. Wolfe worked in the coal mines as well as Pullmand Standard before eventually retiring from C&K Coal Company. He enjoyed spending time with his family, especially his grand children. He was a social member at the VFW in Parker for many years and loved to pass time hauling scrap. He was Protestant by faith. In addition to his wife, he his survived by 6 Daughters: Susan and Rick Felix of Emlenton, Lois Kelley, Carrie and Phil Hunsberger of Emlenton, Brenda and Dan Krizon of Parker, Theresa and Bill Fury of Fenelton, and Elizabeth Curran of Parker. 10 Sons: Jim and Esther Wolfe of Georgia, Peter and Dave Terwilliger of Parker, Wes and Kim Wolfe of Parker, Joseph Terwilliger of Callensburg, Will and Tammy Wolfe of Clarion, Tom and Sandy Terwilliger of Curlsville, Alan and Marcia Terwilliger of Parker, Jon and Sandy Terwilliger of Parker, and Merle Wolfe of Knox. 1 Sister: Mary Lou Turk of West Sunbury. 1 Brother: Jim and Pat Wolfe of Foxburg In addition to his parents he was preceded in death by 3 Sons: Dave and Russell Wolfe, and Jim Terwilliger. 3 Sisters: Ann Johnson, Garnet Freedline, and Muriel Barkley. 2 Brothers: Simon and Dean Wolfe. Friends will be received at the H. Jack Buzard Funeral Home (Wayne St.) Parker, Pa. on Wednesday the 21st., from 2-4 & 6-8PM. Funeral Service will be at the Funeral Home on Thursday at 11AM. Interment will be at the Concord Presbyterian Cemetery.

William A. Wolfe, 81, of Parker, Pa., passed away Sunday (09/18/2011) at UPMC Northwest in Cranberry,Pa after an extended illness. Born on April 9, 1930 in Butler, Pa., he was the son of the late Glenn and Garnet Fleeger Wolfe. Bill was married... View Obituary & Service Information

The family of William A. Wolfe created this Life Tributes page to make it easy to share your memories.

Send flowers to the Wolfe family.