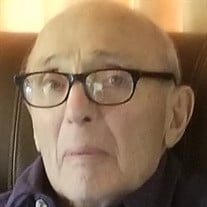 WILLIAM JOHN REED, 83, of Bruin, Pa. passed away Saturday morning (11-09-19) at his residence following an illness. Born in Clairton, Pa. on Oct. 3, 1936, he was son of the late Samuel Brice and Charlotte Kerr Reed. He was married to the former Martha “Marty” Wilson on Dec. 21, 1962, and she survives. Bill served with the U.S. Navy from 1954 to 1957 being honorably discharged with the rank of Seaman. He then attended Washington and Jefferson College at Washington, Pa. earning a Bachelors Degree in Education. He did graduate work with Montgomery County School System (Maryland) earning a Masters Degree in Education, as well was other Post-graduate work in both Pa. and Md. Bill taught high school social studies with the present day Allegheny-Clarion School Dist. from 1962-1965. His career continued in education with Gaithersburg-Bethesda School System in Montgomery County Maryland, from where he retired. Memberships include F.&A.M. Lodge #521 of Parker City, the Scottish Rite-Southern Jurisdiction, and the Knights Commander Court of Honor (KCCH), as well as American Legion Post #488 of Brady’s Bend. Bill and Marty served over twenty-nine years with the Mobile Missionary Assistance Program headquartered in California. He enjoyed and proudly served as a radio announcer for years with the Alaska Christian Radio as they completed missionary work in that state. A devoted Christian couple, they also served in Budapest, Hungary as missionary teachers for a year of service. Their calling led them to the Martinsburg Church of Bruin, where Bill served as Elder and Sunday School Teacher. In addition to his wife, “sweet old Bill” is survived by daughter Charlotte and husband Michael Fort of Pocatello, ID.; five grandchildren: Rachel, Joshua, Rebecca, Sarah, and Hannah; seven great-grandchildren: Kaleb, Jaxon, AddiLynn, DyLan, Emma, Carter, and Cecelia In addition to his parents, he was preceded in death by a son, William Brock Reed who passed in a vehicular accident in 1985. He was also preceded by brother Samuel Reed III, and sisters Emma McIntosh and Britta Cameron. Memorial Services will be held Tuesday, Nov. 26 at Martinsburg Church of Bruin. Visitation from 10:00 to 11:00 AM at Church with Masonic services at 11:00 AM (Lodge #521) followed by Veterans Memorial service by Posts 7073, 598, and 488. Pastor Ray Druckenmiller of Martinsburg Church will then conduct Bill’s service. In lieu of flowers, the family suggests memorials to Martinsburg Church of Bruin, Bruin, Pa. 16022 or the AlphaOmega Center, 247 So. Mn. St., Slippery Rock, Pa. 16057.

WILLIAM JOHN REED, 83, of Bruin, Pa. passed away Saturday morning (11-09-19) at his residence following an illness. Born in Clairton, Pa. on Oct. 3, 1936, he was son of the late Samuel Brice and Charlotte Kerr Reed. He was married to the former... View Obituary & Service Information

The family of William John Reed created this Life Tributes page to make it easy to share your memories.

Send flowers to the Reed family.