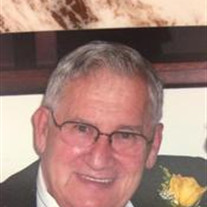 WILLIAM J. LAUER, 76, of Parker, Pa. passed away early Thursday (02-21-13) morning at the emergency room of Butler Memorial Hospital after being stricken ill at his residence. Born in Huefner, Clarion Co. on July 26, 1936, he was the son of the late William J., Sr. and Ruth E. Schill Lauer. Bill was a 1954 graduate of the former Parker High School. Following high school, he was employed for many years at the former glass company in Parker. He then worked for twenty six years at Witco Corp. in Petrolia from where he retired. Mr. Lauer was a long time, devoted member of the former St. Mary's Catholic Church in Parker, where he served as Eucharistic minister, parish council member, choir member. Following the closing of the parish, he became a member of St. Michael's Catholic Church in Emlenton where he faithfully continued his service in many of the same capacities as at Parker. Bill was instrumental, along with another few men, in organizing the Pony League at Parker, and served as manager for a period of time. He also was a valued member of Parker City Council. He enjoyed hunting and fishing with his family and friends. Surviving are his wife of nearly fifty six years, Charlotte Thompson Lauer whom he married Mar. 9, 1957; three children: Patty (David) Shively of Butler, Richard Lauer of Parker, and Penny (Kevin) Clark of West Freedom; four grandchildren and two great grandchildren; one brother: Gerald (Alta) Lauer of Petrolia; two sisters: Ella Mae (Robert) Drake of Houston, TX. and Carol Ann Fitzgerald of Henderson, NV.; also a number of nieces and nephews. Friends may call from 2-4 and 6-8 PM Sunday the H. Jack Buzard Funeral Home, 201 So. Wayne Ave., Parker. Mass of Christian Burial will be held at 11:00 AM Monday at St. Michael's Catholic Church in Emlenton with Father Charles R. Schmitt, pastor, officiating. Interment will follow at Parker Presbyterian Cemetery. A vigil prayer service will be held at 8:00 PM Sunday in the funeral home.

WILLIAM J. LAUER, 76, of Parker, Pa. passed away early Thursday (02-21-13) morning at the emergency room of Butler Memorial Hospital after being stricken ill at his residence. Born in Huefner, Clarion Co. on July 26, 1936, he was the son of... View Obituary & Service Information

The family of William J. Lauer created this Life Tributes page to make it easy to share your memories.

Send flowers to the Lauer family.