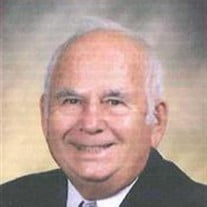 WILLIAM JAMES "Jim" BAILEY, 85, of Dutch Hill, Parker, Pa. entered eternal rest with Jesus Christ early Thursday morning (02-03-11) surrounded by his loving family. His death follows his wife Arlene, who passed ten days ago on January 23rd. Born in Brady's Bend on April 30, 1925, he was the son of the late William Grant and Garnet Hay Bailey. He married L. Arlene Bailey on Dec. 21, 1947, and she passed January 23, 2011. Jim was a graduate of the former Rimersburg High School, and he earned a Bachelor and Master of Science degrees from Clarion State Teachers College (now University). He began an elementary teaching career in 1951 in a twc room school house in Dutch Hill, and continued teaching with the same district (presently A.C.V. Schools of Foxburg) until retirement in 1987. Jim was extremely proud to have served his country in World War II with the U.S. Navy. He was honorably discharged with the rank of Electrician's Mate 2nd Class on Dec. 13, 1945. Because of his military service. Jim truly became an historian of both World War II and the Navy. He was long affiliated with the Church of God, first at the former Dutch Hill church, and later with the unified Parker Hill Church of God at West Freedom. He was a member of the Saturday morning Men's Breakfast Prayer at the church as well as the Wednesday morning Men's Prayer Breakfast at the Plaza near Emlenton. Jim, Arlene, and their five children maintained the farm where all resided for many decades in Perry Township, Clarion County. He was a member of the American Legion at Rimersburg, the NRA, and various golf groups in the area. He was well known for his interest in both hunting and fishing. Surviving are one daughter and husband: Pam and Bill LeVier of Shelocta, Pa.; four sons and wives: William J. (Debbie) of Anderson, IN., John (Melinda) of Tionesta, Pa., Clint (Darlene) of Rimersburg, and Stan (Brenda) of Dutch Hill (Parker); nineteen grandchildren, six great-grandchildren, nieces and nephews. Two brothers and wives: Rev. David (Marian) of Perryville and Rev. Mike(Ann) of Marianville. In addition to parents and wife Arlene, two siblings, Ellen Snyder and Clarence Bailey preceded in death.

The family of William James "Jim" Bailey created this Life Tributes page to make it easy to share your memories.