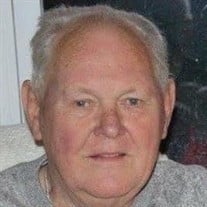 William D. Ellis, of Renfrew, PA, passed away on September 28, 2019, after succumbing to complications from Parkinson's disease. He was 78 years old. William Was born to William E. and Florence H. Tucker Ellis on February 26, 1941, in Titusville, PA. 'Butch,' as he was known to family and friends, graduated from Titusville High School in 1959. He graduated from Indiana (PA) State Teacher's College in 1963 with a degree in Physics Education. Along the way, he met and fell in love with fellow education student Linda L. Hinds of Pittsburgh. They eloped and married on April 1964. Bill was a beloved teacher at Butler High School for nearly 40 years. During that time, he developed and led the Honors A.P. Physics programs. In the early 1970s, he secured a large federal grant to purchase a state-of-the-art computer mainframe fro the high school. This allowed Butler to become one of the first school districts in the nation to teach students how to use computers, long before personal computers were available. Over his career, he led many after-school science clubs and academic competition teams, supported the Golden Tornado Marching Band, and kept the main scorebooks for the Boy's Basketball J.V. and Varsity squads. He was also very active in his community. He was also very active in his community. He facilitated youth groups at both St. Peter's Episcopal and Hill U.P. Churches in Butler and served many years on the Session of the Hill Church. He also led Boy Scout Troop #19 in Meridian as Committee Chairman for nearly a decade. Bill enjoyed fellowship with the Elks Lodge, North Hills Lodge #716 F&AM, the Valley of Pittsburgh Scottish Rite, and Syria Shrine. Bill is survived by his wife, Linda Ellis, and his children Tamara Hyatt and husband Bill, Heather Uenking and husband Tom, and Todd Ellis and wife Allyson, as well as ten grandchildren. He is also survived by brother George 'Jay' Ellis and sister Myrna Sanford. In addition to his parents, he was preceded in death by a sister Lee Anne Loveless. His family will host a memorial service at Hill United Presbyterian Church, 501 Second St., Butler, PA 16001 on Saturday, October 5, 1019, at 2.p.m. It will be preceded by a Masonic memorial service at 1:30.p.m. Instead of flowers, the family requests that you make a donation in his name to the Hill Youth Ministries care of the Hill U.P. Church at the above address.

William D. Ellis, of Renfrew, PA, passed away on September 28, 2019, after succumbing to complications from Parkinson's disease. He was 78 years old. William Was born to William E. and Florence H. Tucker Ellis on February 26, 1941, in Titusville,... View Obituary & Service Information

The family of William D. Ellis created this Life Tributes page to make it easy to share your memories.

Send flowers to the Ellis family.