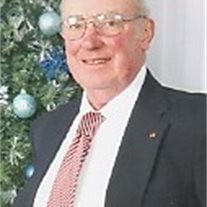 William J. Eichner, 79, of Eau Claire passed away suddenly Friday morning at Butler Memorial Hospital following a brief illness. Born In Pittsburgh, Pa. on May 18, 1939, he was the son of the late Joseph and Anselma Richard Eichner. He was married in Vandergrift, Pa. on May 27, 1967 to the former Amelia Klobuka who survives. A graduate of North Catholic High School in Pittsburgh, he was a member of the St. Alphonsus Catholic Parish of Boyers-West Sunbury. Following high school, Bill attended several trade schools in Pittsburgh before enlisting in the U.S. Army during the Viet Nam War. He was a graduate of the Rotary Wing Aviator School at Ft. Rucker, ALA. Based in Korea, he was involved as aviator over the skies of Viet Nam, and honorably discharged as a Warrant Officer (WO-3). In the Pittsburgh area, he served as director of buildings and grounds for 40 years with Divine Providence, and was a volunteer with Peebles VFD. In the Eau Claire area he operated a farm in Venango Twp., and served several terms on the Board of Directors of Central Electric Co-Op. at Parker. Bill also assisted many area folks with heating, plumbing, air conditioning and general maintenance problems. In addition to his wife, he is survived by three daughters: Toni (Jim) Sekely of Pittsburgh, Theresa (Bob) Beining of Ingoma, and Anna (Glenn) Spontak of Gibsonia; four grandchildren: Michael Sekely, Sami and Madi Beining, and Alex Vacco-Eichner; two sisters: Bernadette Given of Gibsonia and Kathy (Jim) King of Wexford. Friends may call 2-4 & 6-8 Tuesday at the H. Jack Buzard Funeral Home, 201 South Washington St., Eau Claire. Mass of Christian Burial Noon Wednesday at the St. Louis Catholic Church, West Sunbury. With Rev. James Bedillion presiding. In lieu of flowers, family requests Memorial Masses to Catholic Church of donors choice.

William J. Eichner, 79, of Eau Claire passed away suddenly Friday morning at Butler Memorial Hospital following a brief illness. Born In Pittsburgh, Pa. on May 18, 1939, he was the son of the late Joseph and Anselma Richard Eichner. He was married... View Obituary & Service Information

The family of William J. Eichner created this Life Tributes page to make it easy to share your memories.

Send flowers to the Eichner family.