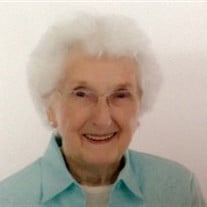 Treva L. Garrison Fair, 88, of Greensboro, NC formerly of Tavares, FL and West Freedom, PA went to be with her Lord and Savior Wednesday February 18, 2015 after a long and courageous battle with cancer.                 Born Sep 21, 1926 in Clarion County, PA Treva was the second child of Burton Peters and Bernice May Peters Krotzer (nee Bashline). Upon graduation from Parker High School in 1945 she was recruited by Owens Illinois Glass Company to relocate to their Bridgeton, NJ plant. There she met and married Melvin L Garrison. They were married 34 years. Treva resided in Bridgeton for 42 years.                 Mrs. Fair was a graduate of Cumberland College Registered Nurse program years before nontraditional students were common on college campuses. She worked at Millville Hospital  until her retirement in 1988. She was a long-time member of Wesley Memorial United Methodist Church where she served as needed and as a circle leader, Sunday School teacher, and lay minister.                 After her retirement Treva relocated to West Freedom, PA. After many years of widowhood she met and married Raymond H. Fair in 1993. They enjoyed 20 years of marriage. She was an active participant of Park Hill First Church of God and took pleasure helping with community fund raising events and Home Makers. She was a proud member of Daughters of the American Revolution. It should be noted that Treva's meringue, fruit,  and pumpkin pies were second to none.                 Ray and Treva were "snowbirds" for 10 years before making their nest in Tavares, Fl. While there they enjoyed church activates, entertaining, travel, and making new friends.                 Due to failing health Treva and Ray relocated to Greensboro, NC in 2012 to be closer to family. They were members of Cornerstone Baptist Church in Greensboro.                 Treva will be forever loved and missed by her daughter Susan L. Gream and son-in-law Tommy of Greensboro and son Richard A. Garrison and daughter-in-law Becky of Niceville, FL. In addition, Mrs. Fair is survived by her sisters Louise Sheffer Leary and Velma Stewart as well as numerous nieces and nephews. Also left to cherish their Grammy's memory is grandchildren Corie, Jeffrey, and Amy and two great-grandchildren Ryder and Brooklyn.  She also leaves behind step daughter Grace Murray and husband Bill, step grandson Darian Murray, his wife Tawney, and their children Cyndal and Nicholas Raymond.                 In addition to her parents Treva is predeceased by her husband Melvin (1982) husband Ray (2013) and younger brother Earl Peters.

The family of Treva L. (Garrison) Fair created this Life Tributes page to make it easy to share your memories.