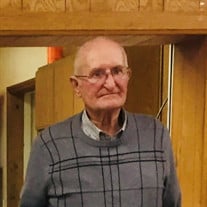 THOMAS CHARLES MILLER, 93, of Emlenton passed away Thursday morning (08-20-20) at the residence of his caregiver and daughter Mitzi Marano with whom he had resided the past four years. Tom was born in Fairview, Butler County on February 17, 1927, to the late Lawrence and Esther Cumberland Miller. He was married to the former Louise Jackson on May 20, 1948, and she preceded him in death on October 7, 2014. Tom was a longtime member of Foxburg United Methodist Church. He served in Germany during World War II as a guard patrolman with the U.S. Army. Prior to the military and afterward, he worked at former RexHide in East Brady. He then sold automobiles for the late Emil Long, Sr.(and Long Motors), and then worked as a sales rep. for Conway McCullogh in lawn and garden sales for forty-six years. Following retirement, he was employed part-time for Allegheny Township (Butler Co.) and assisted his father-in-law for many years with the Jackson family farm. He lived and loved life to the fullest extent, and retouched so many lives with that creed. He believed in honesty, hard work, and providing for his family. Surviving are his five children: Tom (Connie) Miller of Emlenton, Barb (Steve) Fedosick of Butler, Mitzi (Paul) Marano of Emlenton, Gary (Denise) Miller of Seneca, and Amy (Clutch) Runyan of Emlenton; grandchildren: Adam Fedosick of Butler, Zach (Kristi) Runyan of Buffalo, NY, Cody (Carol) Runyan of Emlenton, and Heidi Miller of Seneca; nine great grandchildren, and one great great grand child; several nieces and nephews; three sisters: Esther D’Aurio, Gloria Sweeney, and Diane (Dee) King. He was preceded in death by siblings John and William Miller, Nancy Wright, Margaret Miller, and Mary Hesky as well as daughter Mary Jane Miller and grandson S/Sgt. Andy Miller. Friends may call from Noon to 5:00 PM Monday at H. Jack Buzard Funeral Home, 201 So. Wayne Ave., Parker with the family present for public visitation from 3:00 to 5:00 PM Monday. A private family funeral service will follow at 5:00 PM in the funeral home. Private family interment will be held on Tuesday at St. Petersburg Cemetery.

THOMAS CHARLES MILLER, 93, of Emlenton passed away Thursday morning (08-20-20) at the residence of his caregiver and daughter Mitzi Marano with whom he had resided the past four years. Tom was born in Fairview, Butler County on February 17,... View Obituary & Service Information

The family of Thomas Charles Miller created this Life Tributes page to make it easy to share your memories.

Send flowers to the Miller family.