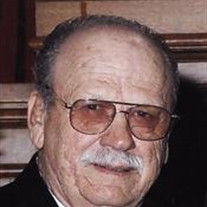 Thomas "Tom" Courson, 70, of Parker, Pa., died Saturday morning (9/03/11) at the Butler Memorial Hospital following an illness. Born on April 15, 1941 in Rimersburg, Pa., he was the son of the late Milton E. and Annabelle Buzard Courson Switzer. He was married to Carol Bargerstock Courson who survives, on April 3, 1959. He was a self employed truck driver with leases for many companies throughout his life. Tom served with the U.S. Army reserves in the late 50's and early 60's, and was a social member of the VFW Post 7073. A former member of the American Legion as well as the Allegheny Clarion Sportsman Club. Tom was especially proud to have been a member of the former Parker Rotary for a number of years. He was protestant by faith. In addition to his wife, he is survived by two daughters: Tammy (John) Tasker of Parker, Pa.; and Triscia (Adam) Bartley of Foxburg, Pa. Six sons: Tom (Melanie) Courson of St. Petersburg, Pa.; Tim (Gaylene) Courson of Knox, Pa.; Troy (Mary Leigh) Courson of St. Petersburg, Pa.; Terry "Chuck" (Michele) Courson of Parker, Pa.; Todd (Brenda) Courson of Parker, Pa.; and Robert (Marcy) Courson of St. Petersburg, Pa. One sister: Joanne Yoder of Rimersburg, Pa. and One brother; Edward Courson of Sacramento, Ca. 15 grandchildren, 6 great-grandchildren, a number of nieces and nephews, and his special dog Chloe. Friends will received Wednesday 9/7/2011 at the H. Jack Buzard Funeral Home, Wayne St., Parker Pa., from 2-4 & 6-8 pm. Funeral Service will be on Thursday 9/8/2011 at 11am at the Parker United Methodist Church with Rev. Ken Hughes officiating. Interment will take place at the Perryville Cemetery.

The family of Thomas Courson created this Life Tributes page to make it easy to share your memories.

Send flowers to the Courson family.