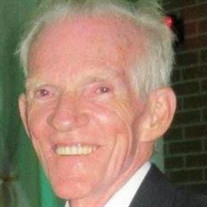 Thomas "TC" Richard Caldwell, 81, of Parker, PA, passed away November 13, 2020 at UPMC Northwest, following an extended illness with his family by his side. Born in Butler, PA on May 27, 1939, TC married his loving wife Kay on June 1, 1957 shortly after graduating from Parker High. Tom served in the US Air Force from ‘57 to ‘61. Tom was stationed at Lackland Air Force Base, TX, Davis Monthan, AZ, Vandenberg, CA, and Thule, Greenland before being honorably discharged on June 6, 1961. Tom worked at Hunter's Truck Sales & Service for over 30 years; first as an Outside Parts Salesman and then as a handyman until he was no longer able. Tom was an active member of his community, serving as a Board member for the Ambulance Service, Historical Society, and the Park Hill First Church of God. He was a Boy Scout Leader, volunteer EMT, firefighter, and ambulance driver, all for Perry Township. Tom was also a member of the American Legion Post 598. In 2005, Tom and Kay joined the American Red Cross to provide relief to victims of Hurricane Katrina. This was a life changing trip for TC as he was moved to surrender his life to the Lord. Tom went on to provide relief to hurricane victims in Florida and Texas and delivered tractor trailers full of supplies to Waveland, MS, and Joplin MO. In 2019, Tom and Kay helped plan and implement the first Perry Township Community Days since 1994. All of their children were in attendance and they were honored to be recognized as "Outstanding Citizens" at a surprise ceremony. TC was known by his family and close friends as a devoted husband and loving father and all around good guy. TC enjoyed making "woodily things" in his woodshop. His family will always cherish the many hand-crafted gifts he created over the years. Tom was known for taking wedding celebrations to the next level with the Caldwell Table Dance. When the DJ played "Old Time Rock & Roll," TC would join the bride on the closest tabletop and lead her and the crowd in the liveliest dance of the evening. Tom enjoyed hunting and when he could no longer hunt he spent his evenings traveling the area in search of turkey and deer. He enjoyed bird watching from his recliner and was an avid reader. Tom will be greatly missed by his wife Kay and their loving family. Children, Debbie Bobbert (Jeff), Dale (Lisa) Caldwell, Lynne (Greg) Sleppy, and Scott (Jacqui) Caldwell, Son-in-law Perry, Grandchildren: Angela (Todd) McMasters, Candi (Jason) Myers, Jason (Sara) Bobbert, Ben (Jess) Bobbert, Kasey (Chris) Moore, David Caldwell, Rachel (Caleb) Whitney, Alex Caldwell (Lauryn), Jordan Thomas Sleppy, Jill Caldwell, Alex Heinen, Gavin Reesman, eight great-grandchildren, his sister Alda (Bob) Young, and sisters-in-law Charlotte (Larry) Callander, Sally Reed, Judy Caldwell, many nieces, nephews, and Maggie the cat. Tom was preceded in death by his mother Helen Dobson Caldwell (Clyde “Squire”) Mills, aunts Flora Stute and Alda Dobson who helped raise him; siblings Mary Ellen Bell, Judy Ball, and Lou Caldwell; parents-in-law Dale & Ione Jordan, brothers-in-law John Ball, Richard "Shorty" Reed, and a variety of unique family pets, including Jasper, Toby, and Dan the Tax Cat. Family and friends will be received at Park Hill First Church of God on Wednesday, November 18, from 11 - 1 and 3 – 5 with a maximum of 25 people permitted in the building at any given time. A private memorial service will be held at 5:00. Masks and social distancing per CDC and DOH guidelines will be enforced.  Memorials may be made to Park Hill First Church of God 3314 Lime Plant Rd or the Perry Township Historical Society PO Box 83, both of Parker, PA 16049.

Thomas "TC" Richard Caldwell, 81, of Parker, PA, passed away November 13, 2020 at UPMC Northwest, following an extended illness with his family by his side. Born in Butler, PA on May 27, 1939, TC married his loving wife Kay on June 1, 1957 shortly... View Obituary & Service Information

The family of Thomas "TC" Caldwell created this Life Tributes page to make it easy to share your memories.

Send flowers to the Caldwell family.