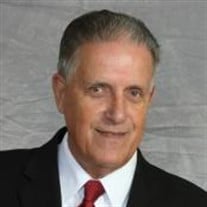 TERRENCE L. “Terry” MOORE, 74, of North Washington (West Sunbury) passed away July 4th evening at this residence surrounded by his family, following a period of declining health. Born in Pittsburgh, Pa. on July 6, 1944, he was the son of late Wm. Henry and Audrey Funkhouser Moore. Following graduation from high school, Terry proudly and honorably served his country with the United States Marine Corps, with much of that time served in the Viet Nam war zone. Following being honorably discharged from the USMC, he later entered service with the United States Navy for sixteen years bringing his total military service to over twenty years. Much of his Navy time was spent aboard the aircraft carrier USS Carl Vinson which also increased his wartime service. Terry completed this service period from August 1963 through December 1989. Following the military, he entered the workforce with a sub-contractor serving the Butler office of Dept. of Public Welfare for nearly twenty years. Terry then assisted with operations at the Buzard Funeral Home in both Eau Claire and Parker for the past eleven years as health permitted. He and his wife Sherri worked diligently in the area of constructing and selling hand-made crafts both locally and in various craft shows in western Pennsylvania. He was especially known for the various types of home decorations made from wood that he designed. He was a member of F. & A.M. Lodge #521 of Parker City, the New Castle Consistory, VFW Post 7073 of Parker of which he served as Officer of the Day, and the American Legion of Grove City. Terry was a longtime avid golfer, whether it is in a league or benefit golf outings. He also looked forward to many RV trips he and his wife Sherri enjoyed from Maine to California to spending the past two winters in the Sarasota, Florida area. Surviving are his wife, the former Sherri Sankey with whom was married nearly twenty-six years; children Theresa Johnson of Oklahoma, Chelsey Bean of Pittsburgh, and Jereme (Heather) Bean of West Sunbury; four grandchildren and four great-great-grandchildren; brothers James (Vickie) Moore of Leesburg and Delbert (Denise) Moore of Mercer; his mother-in-law Helen Sankey of West Sunbury; many nieces and nephews. In addition to his parents, he was preceded in death by one sister Sandy Younkins and two brothers, William and Rodney Moore. Friends may call from 2-4 and 6-8 Sunday at H. Jack Buzard Funeral Home, 201 So. Washington St., Eau Claire, where funeral services will be held Monday at 11:00 AM. Burial will be private. F. & A.M. Lodge #521 of Parker will conduct Masonic Memorial Service at 8:00 PM Sunday in the funeral home. VFW and American Legion Posts of Parker will conduct services at 10:45 AM Monday at the funeral home. In lieu of flowers, the family suggests memorials to the North Trails Library at 1553 W. Sunbury Rd. West Sunbury, PA 16061 or the Moniteau Food Pantry at The Concord Church 625 Hooker Rd. West Sunbury, Pa 16061.

TERRENCE L. &#8220;Terry&#8221; MOORE, 74, of North Washington (West Sunbury) passed away July 4th evening at this residence surrounded by his family, following a period of declining health. Born in Pittsburgh, Pa. on July 6, 1944, he was the... View Obituary & Service Information

The family of Terrence "Terry" L. Moore created this Life Tributes page to make it easy to share your memories.