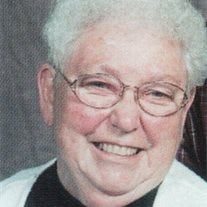 Susan M. Snyder Foust, 85, of Brookville, PA., formerly of Parker, Pa., passed away at Penn Highlands Brookville Hospital on Friday, March 24, 2017. Susan was born on June 14, 1931 in Snyder Valley, Clarion County. She was the daughter of William and Bessie (Rood) Snyder. She was a 1949 graduate of the Allegheny-Parker Joint School. Susan was married to Raymond Jack Foust on July 11, 1953 in Wickenburg AZ. Raymond preceded her in death on June 2, 2009 after 54 years of marriage. Susan worked for the FBI in Washington D.C. from 1949 to 1953. She also worked for the VNA in Clarion and for the Meadows Drug and Rehabilitation center in Wickenburg, AZ. Susan was protestant by faith and enjoyed teaching Sunday School classes. She loved spending time surrounded by children. Susan was an avid reader and loved making crafts.   Surviving is a daughter, Debra (Joseph) Burkett of Worthville, Pa; Four sons, Edward (Barbara) Foust of Parker PA., Lonnie (Marcia) Foust of Franklin, IN., Randy Foust of Warren, Pa., and Michael Foust of Knox, PA. She is also survived by 11 grandchildren and 13 great-grandchildren. Susan was preceded in death by her parents, brothers, Clifford and his wife Ellen Snyder, and Edward and his wife Rose Snyder, a son William “Billy” Foust and Grandsons, Terry Jack “Tj” and Spencer Foust.

The family of Susan (Snyder) Foust created this Life Tributes page to make it easy to share your memories.

Send flowers to the Foust family.