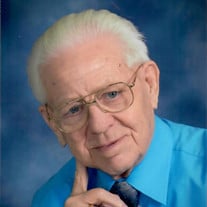 RUSSELL DEAN FOX, 85, of Clarview Nursing and Rehabilitation at Sligo, formerly of West Freedom, passed away early Thursday morning (08-22-2019) at Clarion Hospital following a period of declining health. Born in Perry Twp., Clarion Co. on Nov. 30, 1933, he was son of late Claude and Ailene Conner Fox. A graduate of the former Parker High School, he then enlisted in the United States Army during the Korean Conflict era. He served with Armored Divisions in Germany during much of his enlistment. Dean worked for Northern Pipe Line at Mercer and Quaker State Refinery at Emlenton before going into business for himself. He owned Dean Fox Trucking for over thirty years. He began hauling for a Clarion based company, and then hauled out of Blasdell, NY pulling train trailers through Canada into Michigan. From there he hauled out of Anaheim, CA. for Keystone Lines, criss-crossing the United States until ill health forced his retirement. He lived at Country Springs for a number of years, and was “King of Country” there in 2013. Dean attended both the United Methodist and Church of God (Park Hill) churches at West Freedom. Surviving are three sisters: Joan McCall of Perry Two., Parker, Norma Switzer and June Fox, both of Anderson, IN.; number of nieces and nephews. In addition to his parents, he was preceded in death by a brother and wife, Harold and Bernice Fox, and brother-in-law, Winan McCall. Friends may call 2-4 and 6-8 Saturday at H. Jack Buzard Funeral Home, 201 So. Wayne Ave., Parker, where funeral services will be held at 2:00 PM Sunday with Rev. Dan Myers officiating. He will be laid to rest Monday at Perryville Cemetery near Parker. VFW and American Legion Posts of Parker will conduct Veteran Memorial Service at 1:45 PM Sunday at the funeral home.

The family of Dean Fox created this Life Tributes page to make it easy to share your memories.

Send flowers to the Fox family.