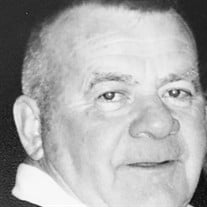 RUSSELL H. BARGER, 88, of Washington Twp., Petrolia, Pa. passed away Sunday evening (05-03-2020) at his home following an extended illness. Born in Callensburg, Clarion Co., Pa. on Nov. 14, 1931, he was the son of the late Russel (correct sp.) and Rhoda Heeter Barger. Working in construction for most of his adult life, he was blacktop paver for the former Bracken Construction Co. of Sligo for over twenty years, and then after ten years plus he retired from Interstate Asphalt of Zelienople. Though an avid hunter and fisherman, Russ’s greatest hobby was gardening. He took great pride in knowing when and what to plant and how to care for a garden. He also enjoyed searching for shephead mushrooms and then preparing them for eating. A perfectionist, he created by hand a chicken cooking spit which would hold many chickens to be enjoyed at the many family barbecues held at his home. Surviving are a brother Frank (Sally) Barger of West Freedom and a loving sister Betty Barger Terwint of the Callensburg area; children: Debra Barger, Valjean Schooley, Shari Bennetti, Stephen Barger, Tanya Pinto, Selena Stevens and their sister Roxanne Hall; step-children: Cindy Williams and Tim Cook; grandchildren: Nolan, Aaron, Rachel, Christopher, Daniel, Chelsey, Ashley, and Heather; also a number of great-grandchildren; also survived by nephew Terry and nieces Pam, Rhonda, and Kathy. In addition to parents, he was preceded in death by wife Doris Montgomery Barger whom he married in 1968 and who died March 29, 2013, and a son Russell H. Barger, Jr. who died June 16, 2012. Due to the Coronavirus conditions in existence at present, the family of “Russ” Barger will host a Celebration of Life at a later date, hopefully, this summer 2020.

The family of Russell H. Barger created this Life Tributes page to make it easy to share your memories.

Send flowers to the Barger family.