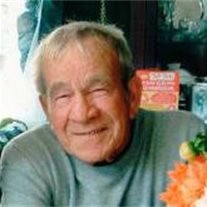 RONALD D. SHIREY, 79,of Parker, Pa. was at his home Saturday (10-10-15) doing what he loved - being at home on the farm with the love of his life when the Lord decided to take him to his eternal home. Born near Indiana, Pa. on Feb. 4, 1936, he was the son of the late Harold Lee and Mary Elizabeth Sullivan Shirey. On October 19th, he would have celebrated his 30th anniversary with his beloved Marion Shoup Shirey. He was a graduate of the former Parker High School. Ron was employed during his adult life as a heavy equipment operator and drilling operator with the former C&K Coal Co., and retired from Parker Sand and Gravel Co. He was a member of the St. Petersburg United Methodist Church. In addition to his wife, he is survived by five children:  Dr. Pam (Jim) Sherer of Hudson, OH, Vickie Shirey of Callensburg, Dawn Shirey of West Salem, OH, Kim Burrell of Emlenton, and Todd (Deb) Burrell of Emlenton; seven grandchildren: Travis, Tim, and Mariah Best, Pete, Mike, and Steve Sherer, and Chase Burrell; four great-grandchildren; four siblings:  Janet Shirey Roddy of Perryville, Frederick Shirey of Hagantown (near Parker), Mike (Janie) Shirey of Foxburg, and Robert (Barb) Shirey of Petrolia; number of nieces and nephews. Ron was also an “acting and caring father” to more area children than could ever be listed, but among those would be Kayla, Kevin, and Kara Fulmer, and Roxie Shreffler.  His heart lives on in all of them as well as his own children. In addition to his parents, he was preceded in death by two brothers, Camillus and William “Bill” Shirey. Per Ron’s request, only a private visitation will be held. A public memorial service will be held Saturday, October 17, 2015 at Three (3:00) PM at his farm in Clarion County with Rev. Dan Myers presiding. In lieu of flowers, the family suggests memorials to the A.C.Valley YOUTH Football program at Foxburg, Pa.  16036.

The family of Ronald D. Shirey created this Life Tributes page to make it easy to share your memories.

Send flowers to the Shirey family.