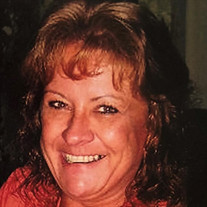 Robin Belinda Smith Weckerly, 58, of Parker, Pa, passed away peacefully at her residence surrounded by her family on Wednesday, August 25, 2021. Born on March 26, 1963, she was the daughter of the late Robert and Alice Cook Smith. Robin graduated from A-C Valley High School in 1982. She also received her Food Administration and Culinary Arts Certificate from Vo-Tech. In her earlier years, she was the former president of the Parker City Council, as well as the former president of the ACV youth-bantam football program. Robin was very hardworking, sometimes even working 4 jobs to support her 4 children. She had previously opened a restaurant called the “Robins Nest” near Butler. Robin was the manager at several other restaurants in the area. In her later years, she was a caregiver for several families of the elderly. Robin also loved her grandchildren dearly. She is survived by her 4 children; Angela “Angie” (Cody) Marshall of Cabot, Arkansas, Heather Weston of West Sunbury, Alan (Jeanette) Weston of Pataskala, Ohio, and Coty (significant other, Shelby) Weston of Sisters, Oregon. She is also survived by her life partner of over 10 years, Timothy “Tim” Weckerly, with whom she resided in Parker, Pa. Her 5 grandchildren, James and Christian Marshall, Kaden Weston, and Everleigh and Maya Weston. Surviving is also her 1 sister; June Wallace, and several nieces and nephews. As well as her 2 dogs; Maggie and Duke, and 1 “fat cat”; Snuggles. In addition to her parents, Robin was preceded in death by her 1 brother; Bud Anderson, and 1 sister; Carol Lipinski. A Celebration of Life Service will be held on Monday, August 30th, at 11:00 AM at the H. Jack Buzard Funeral Home in Parker, Pa. (201 South Wayne Ave.)

Robin Belinda Smith Weckerly, 58, of Parker, Pa, passed away peacefully at her residence surrounded by her family on Wednesday, August 25, 2021. Born on March 26, 1963, she was the daughter of the late Robert and Alice Cook Smith. Robin graduated... View Obituary & Service Information

The family of Robin Belinda Weckerly created this Life Tributes page to make it easy to share your memories.

Send flowers to the Weckerly family.