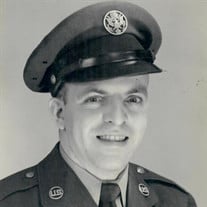 Robert Francis Bernard, 91 of West Freedom, Parker, Pa. entered eternal rest on Ash Wednesday, March 6 at the Clarion Hospital following a lengthy illness. Born Aug. 5, 1927 in Brady’s Bend Pa, he was the son of the late John R. and Bertha E. Deitz Bernard. He was employed for 35 years at the former Glass Containers of Parker where he worked in the cold-end maintenance dept. He was later employed at Century Commonwealth Cable Corp., in Hermitage Pa. for 12 years, retiring in 1992 as a home service technician, He served with the U.S. Air Force during the Korean Conflict. Of his tours of duty, he was proud to have a supply position over 18 months in Alaska. Honorably discharged with rank of Staff Sergeant, he was a dedicated 63-year member of the American Legion Post 598 of Parker. He was past Commander and Chaplain of the Post and attended all funeral services for veterans as long as health permitted including Nov. 2018. Francis was a longtime member and Eucharistic Minister at the former Catholic Church in Parker. He then became a member and Eucharistic Minister of Immaculate Conception Catholic Church in Clarion. He was also a fourth-degree member of the Knights of Columbus of Clarion. He was a member of Masonic Lodge #521 of Parker of where he served as Tyler for many years. Also, a member of the New Castle Consistory, he was a member of the Ushers’ Club for over 25 years. He was awarded recently a lifetime membership in the Perry Twp. Historical Society, a charter member since the beginning, Francis was a dedicated annual Santa Clause at many local organizations, local elementary schools, and malls-working even until early this past December. Francis is survived by his loving wife, Janet Shirley Bernard. Two daughters: Mrs.Wm. (Cathy) Roetter of Pittsburgh; Mrs. Ken (Jill) Heller of Eau Claire. Two sons: Robert George (Nancy) Bernard of Hollywood Fl., Randy A. (Debbie) Bernard of Dutch Hill. 5 grandchildren, and 12 great-grandchildren. One brother John Bernard Jr., of Nickleville. Numerous nieces and nephews. In addition to his parents, Francis was preceded in death by his sisters: Lois Latshaw, Connie Gamble, Eleanor Slaughenhoupt, and Jean Fornauf.

The family of Robert Francis Bernard created this Life Tributes page to make it easy to share your memories.

Send flowers to the Bernard family.