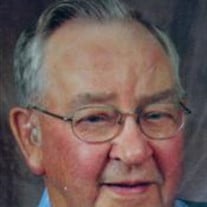 RICHARD L. "Rich" STEWART, 81, of Perry Twp., Parker, Pa. passed away at 12:51 AM Saturday morning (03-09-13) at Golden Living Care Center in Shippenville of complications following a recent illness. Rich was surrounded by his loving family at the time of his passing. Born near Sligo in Licking Twp., Clarion Co. on July 13, 1931, he was the son of the late Merril R. and Ada Mae Murray Stewart. Rich was a longtime member of the Concord Presbyterian Church, and served many years as sexton of the Concord Church Cemetery. He attended the former Sligo High School. Mr. Stewart served with the U. S. Army during the Korean Conflict, and was honorably discharged following service in the European Theater of operations. He was a member and past commander of American Legion Post 598 and a life member of the VFW Post 7073, both of Parker. In early years he worked for Asplundh Tree Service and Wingert Trucking. Following the military, he became a heavy equipment operator for Allison Engineering, and was later employed by C&K Coal Co., from which he retired with twenty seven years of service. Rich worked for Perry Township for ten years, and then served as Township Supervisor for two years. Mr. Stewart, along with wife Velma, farmed their own farm in Perry Township for many decades. He was a member of Parker City-Allegheny Valley Lodge F. & A.M. #521, New Castle Consistory, Zem-Zem Shrine, and was an honorary member of the MURAT Temple Shrine of Indianapolis, IN. He was a member and past worshipful master of Lodge 287, IOOF, of Sligo. He is survived by his wife, Velma Peters Stewart whom he married Dec. 29, 1950; two daughters: Karen (Gary) Defibaugh and Donna Stewart Pryor, both of Parker; two relatives the Stewarts reared: Patrick Burton Sheffer and Scott Edward Sheffer; three grandchildren: Erin (Earl) Barlett, Andrew and Nicholas Pryor, all of Parker; one great-grandchild, Grace Elizabeth Barlett of Parker, and many nieces and nephews. In addition to his parents, he was preceded in death by a son-in-law, Alan Pryor, four brothers: Murray, Glenn, Paul, and Lloyd Stewart, and six sisters: Dorothy Blymiller, Tacy Armstrong, Almeda Stewart, Nettie Mauthe, Annabelle Stewart, and Betty Lou Jordan. Friends may call from 2-4 and 6-8 PM Tuesday at H. Jack Buzard Funeral Home, 201 So. Wayne Ave., Parker, and at the church from 10:00 to 11:00 AM Wednesday. Funeral services will be conducted at 11:00 AM Wednesday in the Concord Presbyterian Church with Rev. Stacie Pitts, church pastor, officiating. Burial will follow in the Concord Church Cemetery. Members of PC-AV Lodge #521 will conduct Masonic Memorial Services at 6:00 PM Tuesday in the funeral home. VFW Post 7073 and American Legion Post 598 will conduct Veterans Memorial Service at 11:00 AM at the churc

The family of Richard L Stewart created this Life Tributes page to make it easy to share your memories.

Send flowers to the Stewart family.