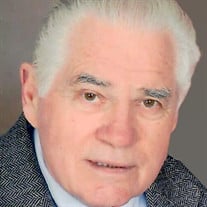 RICHARD MECHLING GARRARD, 83, of Foxburg, Pa. passed away Monday evening (09-23-19) at UPMC-Mercy in Pgh. following a brief illness. Born in Butler, Pa. on February 2, 1936, he was the son of the late Richard Garrard and Kitty Harper Garrard Christy. He was a 1954 graduate of Butler High School, earned a Bachelor’s Degree in an eastern Pennsylvania college, and later a Master’s Degree in Political Science from Youngstown University. He was an Honorably Discharged veteran of service with the U.S. Army and was a member of American Legion Post 66 of Clarion. Dick was an active member of the Foxburg United Methodist Church. At the time of his passing, he was serving his second term as Mayor of Foxburg Borough. Active in local and regional political affairs, he was long involved with the Republican Party. Dick was self-employed all his adult life, with ownership at one time with Foxburg Canoe and Livery and in earlier years with Foxburg Inn on the Allegheny. He is survived by his wife, the former Nancy L. Sheldon; two daughters: Beth Ann (James) Tedeski of Foxburg and Karen (Jack) Butler of St. Petersburg; one son: Christopher (Tammy) Arnold of Sarver; three grandchildren: Robert and David Tedeski and Sarah Butler; four great-grandchildren: Ethan, Charlotte, Sydney, and James Tedeski; one sister-in-law: Lee Garrard of Villages, FL., formerly of Butler; a number of nieces and nephews including Eric Garrard. In addition to his parents, he was preceded in death by a brother Robert Garrard. Memorial services will be held Saturday, October 5, 2019, at 1100 AM in the Foxburg United Methodist Church, So. Palmer Ave., Foxburg, Pa. Members of VFW and American Legion Posts of Parker will begin the memorial service at 11 AM with a Veterans Memorial Recognition.

RICHARD MECHLING GARRARD, 83, of Foxburg, Pa. passed away Monday evening (09-23-19) at UPMC-Mercy in Pgh. following a brief illness. Born in Butler, Pa. on February 2, 1936, he was the son of the late Richard Garrard and Kitty Harper Garrard... View Obituary & Service Information

The family of Richard Mechling Garrard created this Life Tributes page to make it easy to share your memories.

Send flowers to the Garrard family.