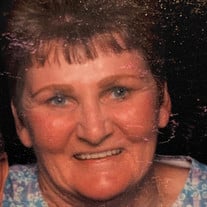 Rebecca E. “Becky” Watts, 76, of Hovey Twp., Parker, Pa. passed away Monday (11-04-19) at Butler Memorial Hospital following an illness. Born in Sewickley, Pa. on May 29, 1943, she was the daughter of the late Lawrence W. and Enid Slagle Black. She was married to Harry Bartley who passed April of 1981 and later married Irwin James “Jim” Watts who survives. Becky was a lifelong and active member of Parker United Methodist Church. Graduating from A.C. Valley High School in 1961, she began employment with the former Glass Containers Corp. of Parker. She then was employed later by Rodger’s Comet Market (now Welters) of Parker. She was a member of the former Ladies Auxiliary of both the VFW and American Legion, but the greatest membership she enjoyed was that of the Red Hat (Ladies) Society in which she participated joyfully as long as health permitted. Surviving in addition to husband Jim are three children: Amy (James) Foringer of Kittanning, Harry Bartley of Franklin, and Bill (Lisa) Bartley of Parker; three step-sons: James (Janine) Watts of Glenshaw, Jeffrey Watts of Gibsonia, and Jerry Watts of Pgh.; a step-daughter-in-law Sophia of Sewickley; grandchildren Jessica (Jeremy) Gilbert and Sadye Bartley; step-grandchildren Justin and Emily Watts; great-grandchildren Rylan, Aurora, and Orin; and a step-great-grandchild “Little G” (Giovanni). In addition to her parents and first husband, she was preceded in death by a stepson, Jay Watts, in 2018. A Memorial Service will be held Friday, Nov. 8, at 11:00 AM at the Parker United Methodist Church, 207 So. Jackson St., Parker with Rev Daryl Larson, church pastor, officiating. Private interment later by family only. In lieu of flowers, the family suggests memorials in Becky’s memory to Parker United Methodist Church, 207 So. Jackson St., Parker, Pa. 16049.

The family of Rebecca E Watts created this Life Tributes page to make it easy to share your memories.

Send flowers to the Watts family.