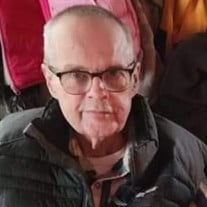 Randolph  "Randy" E. Hopper, passed away Saturday, April 16, 2022, in Kettering, Ohio. Randy was born February 16, 1951, in Oil City, PA to the late Robert E. Hopper and Nioma Hopper Hutchison. He graduated from AC Valley High School in 1969 and Clarion University in 1973. Later on, he received a Masters Degree from Wright State University of Dayton, Ohio. He was employed by the Department of Defense at Wright Patterson Air Force Base as the Human Relations Specialist. He later retired in 2006. One of the joys of his retirement was the great friends he made while volunteering at Soin Medical Center. He was a beloved son, brother, uncle, and great uncle. He will be remembered for his generosity and kindness. He is survived by his brother, Rod (Sara) Hopper of Foxburg, and his sister, Karen Cassin of Bradford, PA. Randy is also survived by his nieces, Anna Babcock, Jessica Smith, Emily Stewart, and Heidi Hopper. As well as nephews, Joe Hopper and Rob Carson, 14 great-nieces and nephews, and 1 great, great-niece. In addition to his parents, he was predeceased by his sister Kristiannne Carson Bartley. Visitation will be held from 3:00-4:00 PM on Saturday, April 23rd, at the H. Jack Buzard Funeral Home in Parker (201 S. Wayne Ave) where a service will follow at 4:00 PM. Burial will take place at the Foxburg Cemetery at the convenience of the family. In lieu of flowers, memorials can be made to the charity of the donor's choice.

The family of Randolph E. Hopper created this Life Tributes page to make it easy to share your memories.

Send flowers to the Hopper family.