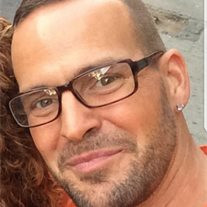 PATRICK DREW DOLBY, 48, of New York City, formerly of Chicora area, passed away Wednesday, June 20, 2018 in New York City. Born in Butler, Pa. on June 1, 1970, he was the son of Robert (Sr.) and Joanne E. Sutton Dolby. In early years he was of the Lutheran faith, and was a 1988 graduate of the former East Brady High School. He also served four years with the U.S. Navy., Patrick was an executive assistant with AIRBNBS - a hospitality operation in New York City.  He is survived by his parents of Chicora, Pa., a sister and husband Andrea (Douglas) Mausser of Jamestown, Pa., and a brother and wife Brent (Jennifer) Dolby of Chicora, Pa.; also survived by nieces Raegan Dolby and Clarisa Mausser, nephew Derrick Mausser, and a great niece Adelina Mausser. Patrick was preceded in death by his brother, Robert “Rob” Dolby, Jr. in 1995, maternal grandparents Martha and Ira Sutton, and paternal grandparents Vera and Kermit Rohrbach. Visitation will be held from 2:00 to 4:00 PM Saturday, July 28th, at H. Jack Buzard Funeral Home, 201 So. Wayne Ave., Parker (Armstrong Co.) Pa. where a Memorial Service will be held at 4:00 PM.  He will later be laid to rest beside his brother at Mt. Pleasant Cemetery, near Chicora.

The family of PATRICK DREW DOLBY created this Life Tributes page to make it easy to share your memories.

Send flowers to the DOLBY family.