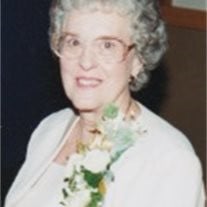 NAOMI L. FOWLER, 89, of Country Springs, Sligo, formerly of the Eau Claire area, passed away Saturday afternoon (09-03-16) at VNA In-Patient Hospice in Butler surrounded by her loving family. Born in Rimersburg on December 2, 1926, she was daughter of late Lewis Dale and Mary Lucille Forbes Carmichael. On May 15, 1948 she married Robert Isaac Fowler who passed away March 5, 2004. Naomi served many years as a loving, caring, and dedicated secretary at the former Washington Elementary School of the Moniteau School District from where she retired. With a strong and keen interest in music, she enjoyed singing in choirs and playing piano.  She was a longtime member of the Northern Butler County Music Club. Mrs. Fowler was a longtime member and faithful Sunday School teacher at the Eau Claire Presbyterian Church.  She later became affiliated with the Church of God of Prophecy at Six Points,  near Eau Claire. Naomi was  gracious and gentle soul who deeply loved her husband, children, grandchildren, and especially her Lord and Saviour. She unselfishly offered her help and services any where she was needed. She was also a talented seamstress.. Left to cherish her memory are four children and spouses, Lewis (Linda) Fowler of Hilliards, Susan (Gary) Marshall of Harrisville, Janet (Jon) Schutz of Warsaw, IN., and Tina (Steven) Prokay of Eldorado (Parker); eight grandchildren, eight great-grandchildren, nieces and nephews also survive. Also surviving are four siblings: Dorothy Carmichael Fowler of Country Springs, Rev. Judith (Cecil) Murray of Lafayette, IN., Vernon (Pat) Carmichael of California, and Dean (Pat) Carmichael of Cranberry (Venango Co).

NAOMI L. FOWLER, 89, of Country Springs, Sligo, formerly of the Eau Claire area, passed away Saturday afternoon (09-03-16) at VNA In-Patient Hospice in Butler surrounded by her loving family. Born in Rimersburg on December 2, 1926, she was daughter... View Obituary & Service Information

The family of Naomi L. Fowler created this Life Tributes page to make it easy to share your memories.

Send flowers to the Fowler family.