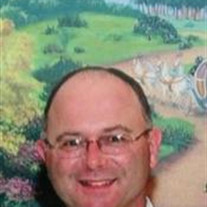 MICHAEL EUGENE "Mike" OVER, 52, of Porter Township, New Bethlehem, Pa. passed away suddenly of accidental causes early Saturday morning (06-22-13) in Perry Township, Armstrong Co. while on an electrical outage call for the Central Electric Co-Op. of Parker. Born in Clarion, Pa. on April 3, 1961, he was the son of Mary Wyant Over, who survives, and the late Walter V. Over. He was a 1979 graduate of Redbank Valley School District at New Bethlehem. "Mike" was employed over twenty years with the Central Electric Co-Operative (REA) of Parker, where he was presently an electric lineman. Born into a farming family, he enjoyed operating his own farm in Porter Township. A devoted family man, he thoroughly enjoyed travellng with his family, especially making three trips to Disneyland for the girls' enjoyment. He was a member of the Grace Community Church at Curllsville. Mr. Over was a member of Canby Lodge F.&A.M. # 520 of St. Petersburg, Pa., the Valley of Oil City, and the Coudersport Consistory. Surviving are his wife, Crystal Brown Over whom he married June 20, 2004 at Robinson Chapel, near Parker; two daughters: Carly Michelle and Abigail Marie Over, both at home; step-daughter: Tabitha Saye of Chicora; his mother of Porter Twp.; two sisters and husbands: Terri (John) Bowersox and Shari (Jeff) Carlson, all of Porter Twp., New Bethlehem; his mother-in-law, Carol Anthony Brown of Parker; number of nieces, nephews, and cousins. Friends may call from 2:00 to 8:00 PM Wednesday at H. Jack Buzard Funeral Home, 201 So. Wayne Ave., Parker. Funeral services (no visitation) will be held at 11:00 AM Thursday at Grace Community Church, Curllsville Rd., Curllsville, Pa. with Pastor Dan George, church pastor, officiating. Interment will follow at Squirrel Hill Cemetery, Porter Twp., Clarion Co. Members of Canby Lodge #520 will conduct Masonic Funeral Service at 8:00 PM Wednesday at the funeral home.

The family of Michael Eugene Over created this Life Tributes page to make it easy to share your memories.

Send flowers to the Over family.