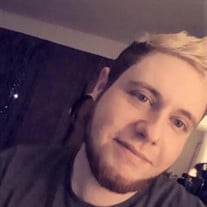 MICHAEL ALEXANDER CONNER, 26, of st. Petersburg, Pa. went to be with the Lord on Monday (04-27-2020) following a long, hard battle with addiction. Born in Clarion, Pa. on February 19, 1994, he was the son of Mark and Mary Beth Freeberg Conner, who survive of St. Petersburg. He was a 2012 graduate of Allegheny Clarion Valley School and Clarion Co. Vo-Tech. He had been employed by Miller Welding of Brookville, and later by Alturna Mats of Titusville as a machinist. He was quite proud of his welding portfolio and heavy equipment operator’s license. Michael was a gentle giant with a heart of gold and was especially fond of nephews Jacob and Rowen, and niece Megan. Mike enjoyed four-wheeling, video games, woodworking, and spending time with family and friends. “Mike” was a gentle soul who could light up a room with his smile, wicked sense of humor, and yet could be feisty and outspoken, and all the while would have done anything for anyone struggling with his demons. He never wanted to be defined by his addiction or mistakes, and truly had high hopes for his future in being a light for others struggling with his affliction. Many times he spoke of felling the judgment and condemnation of society. We as a family hope that his life and death help shatter that stigma of addiction with others. We as a family feel the best manner to honor “Mikey” is for anyone reading this or knew him to think twice before judging an addict, but rather to choose compassion and reaching out to others in this situation. Addiction does not define nor does it discriminate; it will take hold and destroy anyone in its path including the family and people who love them. Addiction is a demon that is wiping out a generation of loved ones with serious conflict. “Mike” was not just another statistic or “one gone too soon”, but was a special gift to his family and anyone who crossed his path in his journey of life. In addition to parents, he is survived by two sisters: Marissa (Emil) Fischli of Hasson Heights, and Malia Conner of St. Petersburg; two brothers: Mitchell (Randi) Conner of Elwood City, and Matthew (Emily) Conner of North Huntingdon; maternal grandmother, Elaine Callander Simpson of West Freedom (Parker); maternal grandfather: John (Judy) Freeberg of Houtzdale, Pa.; a number of nieces, nephews, aunts, and uncles. He was preceded in death by his paternal grandparents Doyle and Doris Conner and his maternal step-grandfather Larry Simpson. Due to the Corona-virus, and following the guidelines set by the CDC and Pa. Dept. of Health, a private visitation and funeral will be held for Mike Conner, followed by a private burial at Mt. Calvary Cemetery at Dutch Hill in Perry Twp. Clarion Co. A public memorial service may be held at a later date. he family suggests memorials to Not One More Clarion, % KGC Federal Credit Union, 778 Beatty Ave., Knox, Pa. 16232 or Hope Rising Church, 240 Liberty St., Clarion, Pa. 16214.

MICHAEL ALEXANDER CONNER, 26, of st. Petersburg, Pa. went to be with the Lord on Monday (04-27-2020) following a long, hard battle with addiction. Born in Clarion, Pa. on February 19, 1994, he was the son of Mark and Mary Beth Freeberg Conner,... View Obituary & Service Information

The family of Michael A. Conner created this Life Tributes page to make it easy to share your memories.