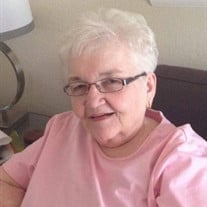 Mary Ellen Bell, 80, of Marion Center, PA, formerly of North Washington, PA, passed away Tuesday morning, July 4th, following a recent diagnosis of colon cancer.  She passed quietly at VNA Hospice in Butler with family at her bedside.  Born June 28, 1937, in Butler, PA, she was the daughter of the late Richard and Helen Dobson Caldwell. Mary Ellen grew up in Parker, PA, where she reigned as May queen, and worked hard at the local drugstore throughout high school.  After high school, she worked in secretarial roles, retiring from Marion Center National Bank in July 2000. Mary Ellen enjoyed drawing, singing in her local church choir, and was a member of the ladies’ card club in North Washington for several years.  As a member of the North Washington VFD Ladies Auxiliary, she supported her community and events.  She loved spending time with her family, which included many vacations and summer weeks at the river with her sisters and extended family.  She and her sisters could often be seen at family functions performing the ‘YMCA’, to the amusement of everyone there!  Mary Ellen was famous for her peanut butter fudge, and was known by her family, friends, and coworkers as a fun-loving and laidback lady.  Her daughters always encouraged her to try out for ‘Jeopardy’, as she was a fountain of knowledge on trivia.  Mary Ellen loved playing bingo, and watching all sports in her later years.  She frequently won the local basketball pool. Known to her family and friends as ‘Mare’, she is survived by her daughters Kathleen Bell (Tim) of Millbury, OH, Kim Carothers (Don) of Butler, PA, and Robyn Bell (Steven) of Palm Harbor, FL.  Also surviving are siblings Tom (Kay) Caldwell of Parker, PA, Alda (Bob) Young of Marion Center, PA, sister-in-law Judy Caldwell of Antioch, TN, as well as numerous nieces, nephews, great nieces, great nephews, and great-great nieces. In addition to her mother and father, she was preceded in death by brother Lou Caldwell, sister Judy Ball, brother-in-law John Ball, and stepfather Squire Mills. Gathering of friends at 10AM, and memorial service to be held at 11AM on August 5th at the funeral home in Parker, PA (201 S. Wayne St.). In lieu of flowers, memorial donations in her honor may be made to:  VNA Hospice, 154 Hindman Rd, Butler, PA 16001, or North Washington Presbyterian Church, c/o Vi Stewart, PO Box 84, North Washington, PA 16048. To view/send condolences, sympathy cards, flowers visit buzardfunerahomes.com

The family of Mary Ellen Bell created this Life Tributes page to make it easy to share your memories.

Send flowers to the Bell family.