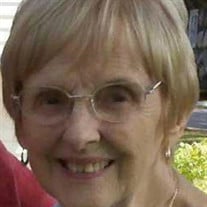 MARIAN DAVIS “Billie” CROWLEY, 87, of Frankenmuth, MI., a Pennsylvania native, passed away Thursday (May 20, 2021) afternoon in Frankenmuth, Michigan, following a period of declining health. She was born in Knox, Pa., on Oct. 2, 1933, she was the daughter of the late Leo and Hazel Davis Richardson. She was the widow of the late John E. “Jack” Crowley who passed away on February 25, 2014. “Billie” is survived by a daughter:Lee Crowley of Alpharetta, GA. Two sons:Pat (Terri) Crowley of Frankenmuth, MI., and Dan Crowley of Frankenmuth, MI.; four grandchildren: Lauren (David) Swilley, Jack (Audra) Crowley, Emily (Kirk) Fortune, and Erin Crowley and fiancé Clay Messick; five great-grandchildren: Liam, Emma, Ellie, Adrienne, and John. In addition to her parents and husband, she was preceded locally by sister-in-law Kathy Wagner Parenti and brother-in-law Larry Wagner. A graveside service will be held later this year at the Parker Presbyterian Cemetery where she will be laid to rest with her husband.

The family of Marian Davis Crowley created this Life Tributes page to make it easy to share your memories.

Send flowers to the Crowley family.