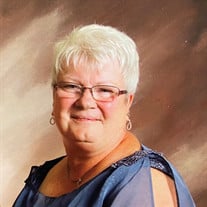 MARGARET L. “Peg” FITZGERALD, 71, of Harrisville, formerly of Boyers, passed away early Friday morning (10-08-21) at Butler Memorial Hospital following a brief illness. Born in Grove City on July 5, 1950, she was the daughter of William H. “Buss” Hoffman, Jr. of Clintonville who survives, and the late M. Lucille Roxberry Hoffman. She was a 1968 graduate of Grove City High School, and was long affiliated with St. Alphonsus Catholic Church of Murrinsville. “Peg” was a longtime employee of Farmers National Bank of Eau Claire where she served as teller to Customer Service Representative at retirement in 2015. She was a devoted daughter, wife, mother, grandmother, and great-grandmother. Surviving in addition to her father are her husband Thomas “Tom” Fitzgerald whom she married May 10, 1969. She was the mother of Tracie (Jay) Eiler of Hilliards, Micki (Ron) Sanderson of West Sunbury, Todd (Babette) Fitzgerald of Harrisville, and Jason (June) Fitzgerald of Boyers; grandmother of Maegan (Steven), Lexi (Dustin), William, Ronnie, Emalie, Madi, Hailie, Autumn, “TJ”; great-grandmother of Parker and Kynleigh; sister of William J. (Patty) Hoffman of Amelia, OH, and also survived by several nieces and nephews. All arrangements are private, and Buzard Funeral Home staff of Eau Claire are assisting the family at this time.

The family of Margaret L. Fitgerald created this Life Tributes page to make it easy to share your memories.

Send flowers to the Fitgerald family.