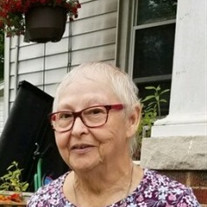 MARY ANN WYANT, 73, of Washington Twp., Parker passed away at 5:27 PM Wednesday at her residence surrounded by her loving family. Born in Sligo, Clarion Co., Pa. on July 10, 1945, she daughter of the late Samuel Willard and Elizabeth Spare Smith. Mary was married Sept. 30, 1961 to William Eugene “Bill” Wyant who survives. She was a devoted member of Park Hill Church of God at West Freedom (near Parker) and the Women of the Church of God.  Mary had sung in the choir, and served as a most cheery greeter passing out the church bulletin for many years. She and husband Bill were dedicated to the care of the church grounds, keeping the grounds in “carpet-like” appearance until her health prevented further participation this year. She was faithful to provide cookies and coffee to church-goers that wished one of her treats. In addition to being a devoted wife, mother, and grandmother, she had been employed at the former Glass Containers at Parker, a cook at the former Pam’s Restaurant at Callensburg, and served as cashier at the former Hill’s Store in Butler. Surviving in addition to her husband are three daughters: Karen Switzer of Butler, Ruth (Bill) Howard of Emlenton, and Cathy Ace  of Hilliards; one son: William “Bill” (Shelley) Wyant of Sligo;  eleven grandchildren, eleven great-grandchildren, and numerous nieces and nephews.  She is also survived by sister Ellen (Dean) Greenawalt of Knox area and brother Darrell (Helen) Smith of Kittanning. In addition to her parents, she was preceded in death by son-in-law “Joe” Ace. Friends may call 2-4 and 6-8 PM (Friday) at Park Hill Church of God, 3314 Lime Plant Rd., West Freedom (near Parker).  Funeral services 11:00 AM Saturday (funeral service only) at the Church with Associate Pastor Amy Callander officiating.  Burial will follow at Concord Presbyterian Cemetery, Perry Twp., Clarion Co.

The family of MARY ANN WYANT created this Life Tributes page to make it easy to share your memories.

MARY ANN WYANT, 73, of Washington Twp., Parker passed away at...

Send flowers to the WYANT family.