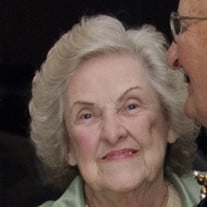 Louise L. (Jackson) Miller, 85, of Parker, died Tuesday morning, Oct. 7, 2014, at VNA Hospice in Butler. Born Jan. 17, 1929, in Butler County, she was the daughter of the late Warren and Mae Wolcott Jackson. Louise graduated from Emlenton High School in 1947. She was a homemaker. Louise was an active member of the Foxburg United Methodist Church. She enjoyed spending time with her family, cooking, sewing, shopping, watching sports on TV, church activities and showing her family the value and quality of life itself. Louise married Thomas C. Miller on May 22, 1948, and he survives at home. In addition to her husband, she is survived by her five children, Thomas Miller and his wife Constance “Connie” of Emlenton, Barbara Fedosick and her husband Stephen of Butler, Melissa “Mitzi” Marano and her husband Paul of Emlenton, Gary Miller and his wife Denise of Seneca, and Amy Runyan and her husband Robert “Clutch” of Emlenton; five grandchildren, Staff Sgt. (retired) Andrew Miller, USMC, and his wife Michelle, Adam Fedosick, Heidi Miller and her fiancé Andrew Friskhorn, Zach Runyan and his wife Kristi, and Cody Runyan and his wife Carol; six great-grandchildren, Andrew J. and Dalton Miller, Drew and Anastasia Friskhorn, and Louisa and Julia Runyan; two step-granddaughters, Ashley Rumbaugh and her husband Patrick, and Shannon Bernard and her husband Joel; two step-great-grandchildren, Keegan Rumbaugh and Kylee Bernard; a brother, John A. Jackson and his wife Linda; three sisters-in-law and numerous nieces and nephews. In addition to her parents, she was preceded in death by an infant daughter, Mary Jane Miller; and her brothers, Robert, Charles and Willis Jackson. Visitation will be held from 2 to 4 and 6 to 8 p.m. Thursday at the H. Jack Buzard Funeral Home, 201 S. Wayne Ave., Parker. In lieu of flowers, memorials may be made to the Foxburg United Methodist Church. Funeral services will be held at 11 a.m. Friday in the funeral home with the Rev. Dan Myers presiding. Private interment will be held at the St. Petersburg Cemetery.

The family of Louise L (Jackson) Miller created this Life Tributes page to make it easy to share your memories.