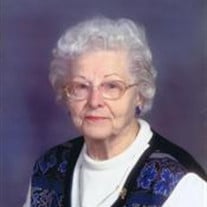 LILLIAN G. FOX MYERS, 89, of Clarview Nursing and Rehabilitation Center, Sligo, formerly of West Freedom, entered eternal rest with her Lord and Saviour late Sunday morning (09-30-12) at Clarview surrounded by her family. Born in Perry Township, Clarion Co. on December 6, 1922, she was daughter of the late Robert C., Sr. and Ada Jordan Fox. She was married on October 28, 1941 to Richard J. "Rich" Myers who passed away July 21, 1984. Lillian was a lifelong and devoted member of the West Freedom United Methodist Church. Lillian was a member of the United Methodist Women, a Sunday School teacher for many years, sung in the choir, served on the official church board, and assisted with dinners at the church as long as health permitted. She was employed at the W.A. Moyer and Sons Level Works in earlier years, and worked briefly at the former J&M Market both of Parker. Mrs. Myers was a longtime and active member of the former Lady Rebakah Lodge of West Freedom (now Clarion). She was a well-known participant of quilting, both at the church and in her home. Surviving are two daughters and husbands: Peggy and Gayle Elliott of West Freedom and Kathy and Scott Hepner of Westerville, OH.; two sons and wives: Steven and Pam Myers and Daniel and Kim Myers, all of West Freedom; fifteen grandchildren, twenty four great-grandchildren, and three great-great-grandchildren; one sister: Violet Beale of Cleveland, OH.; many nieces and nephews. In addition to her parents and husband, she was preceded in death by a daughter, Rita Myers Giese in 1982, four sisters: Nellie Cooper, Leoma Pollum, Rissa Munkers, Roberta Owens, and three brothers: Claire, Willis, and Robert Fox. Friends may call from 6-8 PM Wednesday and from 2-4 and 6-8 PM Thursday at the West Freedom United Methodist Church, Pa. Rte 368 and Doc Walker Rd., West Freedom (near Parker). Funeral services will be held at 11:00 AM Friday in the church with Rev. Dan Myers, her son and United Methodist clergyman, and Rev. Ken Hughes, church pastor, co-officiating. Private family burial will follow at the West Freedom Cemetery, Perry Twp., Clarion Co. In lieu of flowers, the family suggests memorials to the West Freedom United Methodist Church, Pa. Rte 368, Parker, Pa. 16049

The family of Lillian G. Myers created this Life Tributes page to make it easy to share your memories.

Send flowers to the Myers family.