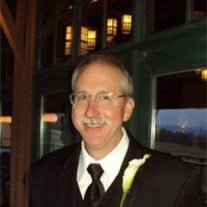 Lawrence “Randy” Shoup was called to his eternal Home on September 11, 2017 following a brief but hard-fought battle with cancer. His final days were spent receiving wonderful care at the VNA Hospice Center on Benbrook Road. Left to forever carry his legacy and memory are his beloved wife of40 years Suzi (Schmidt) Shoup, and 3 daughters: Sarah (Jeff) Baucom of Charlotte, NC, Megan (Dennis Jr) Miller of Butler, PA, and Melanie (Evan) Shoup-Knox of Staunton, VA. He was the beloved grandfather of Grady and Landry Baucom, Brayden and Blake Miller, and Sullivan Knox. He is also survived by his father, Harold Shoup of Parker, PA, a sister Kathy (Tom) McKenna of Montana, a sister Trish Cotton of California, a brother Jerry (Terry) Shoup of Gibsonia, PA, his siblings-in-law whom he dearly loved, and numerous nieces and nephews. He was preceded in death by his mother Beverly (Bates) Shoup and numerous aunts and uncles. Randy graduated from Mercyhurst College (where he met the love of his life) in 1975 with a degree in criminology. He went on to serve his country while stationed in Vicenza, Italy as a member of the US Army for 3 years with his new bride by his side. Upon returning home he worked as a military police officer and went on to join the Attorney General’s office as a narcotics agent. He built a career he was proud of doing a job he loved for 28 years. He always said that “when you have a job you enjoy it never feels like work”. Upon retiring in 2004 he joined the Butler County Sheriff’s department as a deputy and proudly served his community until his illness struck in 2016. Randy was a longtime member of Trinity Lutheran Church in Butler and a lifetime member of the Pine Hollow Rod and Gun Club. He was an avid outdoorsman and loved hunting, fishing, and spending time on his boat. He firmly believed that the way to start every morning was a good cup of coffee. Believing in a God that has the power to heal every person foreseeably keeping them on earth forever, and chooses instead to walk with us on a journey to goodbye, causes one to look more closely at what God is trying to teach us through the people that pass through our lives and the legacy they leave behind. One of the blessings that a terminal diagnosis affords people is an awareness of how precious time is and the opportunity to be intentional about reflecting on lessons learned. Our family has spent a lot of time along this journey thinking about what is important to be shared and remembered about Dad and landed on these things: 1. He was a man who loved through his actions. He was not one for many words, he left that to mom. But there was never a question that we were loved because he was unfailingly present for every event in our lives and anything we needed. He would drive long distances to and from court cases or meetings in a single day to avoid spending nights away from his family. There were "full cans" of “pop” given as treats after bike crashes or bad days. He volunteered at Girl Scout outings, campouts, and taught archery at sleep away camp. He attended nearly every sporting event, concert, play and parade, and was a regular at his grandsons’ sporting events as well. He moved us countless times over the course of our lives and was at the ready for any project identified. Oil levels and registration stickers were routinely checked on vehicles well into adulthood. As his battle with cancer limited his ability to "act" there were no doubts to be reconciled, we were all well-loved and had been shown this time and time again all our lives. 2. It is easy to move through life knowing the right way to live when you have seen morals and integrity demonstrated by your parent s' actions. There was no grey area in this sector of Dad's life. He demonstrated himself and encouraged in us to always seek ways to be helpful. To work hard and be accountable. He had little time or patience for self-indulgence or ego. He admired hard work and respectable actions. For a man so anchored in concrete, indisputable facts, his faith in the unseen was something difficult for him to articulate save for one thing... he knew that adhering to Christian values was the right way to live. So again, while he was not one for philosophical conversations about a higher being he demonstrated his faith by being present and participating in church with his family, and incorporating prayer into daily routines thereby showing us it was an expectation he had of himself and of us. This was enough of a foundation for each of us to develop a strong faith of our own which has in turn become the gift of peace and comfort as our time with him on earth came to a close and we each had to wrestle with the idea of a life without him in it. So he leaves us to remember these lessons for a short while: to show love, to show up, to work hard, to do right, and to have faith. And with this last one comes comfort in knowing we will see him again. See you in the woods Dad.

Lawrence &#8220;Randy&#8221; Shoup was called to his eternal Home on September 11, 2017 following a brief but hard-fought battle with cancer. His final days were spent receiving wonderful care at the VNA Hospice Center on Benbrook Road. Left... View Obituary & Service Information

The family of Lawrence "Randy" Shoup created this Life Tributes page to make it easy to share your memories.

Lawrence “Randy” Shoup was called to his eternal Home on September...

Send flowers to the Shoup family.