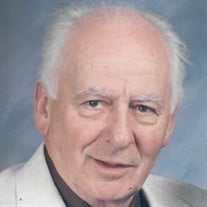 LaVern D. Wall, 97, of Emlenton entered eternal rest Thursday morning (04-25-19) at Parker Personal Care Home following a brief period of declining health. Born on July 20, 1921, at Dayton, Pa., he was the son of the late George and Dorothy L. Smith Wall. He was married to Elizabeth “Ebbie” Byers on Feb. 7, 1946, in Springdale, Pa. by Rev. Wesley Weisbrod, and they celebrated sixty-five years of marriage in 2011. “Ebbie” later passed away Dec. 27, 2015. LaVern was employed for twenty-seven plus years with Gulf Research and Development at Harmarville, retiring as Supervisor of R & D. He served as supervisor and plant engineer with the Hospital Linen Service on Northside-Pgh. for ten years. He then served as a maintenance supervisor at the Church of God-Whitehall Church Camping facility at Emlenton from 1986 until retiring in 2007. Though very humble and modest about his World War II military service, “Vern” served with the U. S. Army Air Force from August 15, 1942, thru Sept. 14, 1945, or as he would say, “three years and one month”. He earned the Distinguished Flying Cross, with Unit Badge, Air Medal with three Oak Leaf Clusters, Europen-African-Middle Eastern Service Medal with four Bronze Stars, and the Good Conduct Medal. He served as a flight engineer and gunner on B-17 aircraft and saw action on thirty-one missions over the Rhineland, Normandy, and other European locations. He and his crew were awarded Presidential Citations for extraordinary service. A very devoted husband and father, LaVern was a gentleman of very deep-rooted Christian belief who practiced those beliefs until the end of life. He was a member of Park Hill First Church of God at West Freedom. Surviving are two sons and wives, Robert and Nancy Wall of Roebuck, SC and Leslie D. and Peggy Wall of Colbert, GA.; one grandson, George Peter Wall; one sister, Geraldine Robertson of Anderson, IN., and nieces and nephews. In addition to his parents and wife, he was preceded in death by two sisters: Beatrice Pickering and Virginia Morgan. Family and friends may call from 2-4 and 6-8 PM Sunday at Park Hill Church of God, 3314 Lime Plant Rd., West Freedom (Parker), and from 9:00 to 9:45 Monday. Funeral services will be held at 10:00 AM Monday at the Church with Pastor Eric Mitchell and staff officiating. Burial will follow at Greenwood Memorial Park in Lower Burrell. VFW Post 7073 and American Legion Post 598 of Parker will conduct a Veterans Memorial Service at 9:45 AM at the Church.

The family of LaVern D. Wall created this Life Tributes page to make it easy to share your memories.

Send flowers to the Wall family.