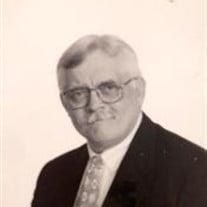 LARRY E. WAGNER, 72, of Miller's Eddy, Parker, Pa. passed away at 11:47 PM Monday evening at the Caring Place in Franklin following a several month illness. Born on March 12, 1940 in Parker, Pa., he was the son of the late George "Buss" and Rose Lange Wagner. A 1958 graduate of the former Parker High School, he then enlisted in the United States Air Force. He was honorably discharged with the rank of Airman First Class having served from January of 1959 through October of 1962. He was a graduate of the Basic Medical and the Medical Lab Specialty Courses in the Air Force. Larry served both stateside and in Korea. While in the service, he attended college at the University of South Carolina. He was a member of the VFW Post 7073 of Parker and the American Legion of Brady's Bend. Larry worked for a number of years in the medical lab as a medical technician at VAMC in Butler, then employed by the Butler Redevelopment Authority, and final employment and retirement was from Western Southern Life and Annuity Corp. He was involved with the former Parker Rotary as both a member and past president. He was also involved with the Quarterback Club at the Karns City School District. Larry loved to tell people he was from Miller's Eddy, and was proud of hosting his annual "Pig-Fest" (pigroast) for family and friends at which people came from all over Pennsylvania as well as many other states. The "Pig-Fest" as well as many other gatherings at the home of Larry and wife Barbara were the highlights of the Wagner family as it was just that, family gathered together. He was a member of St. Eusebius Catholic Church of East Brady. Surviving are his wife, Barbara Popovitch Wagner, whom he married April 4, 1964 in Maryland; seven children and spouses: Bradley E. (Marci) Wagner of Emlenton, Joel A. (Sandi) Wagner of Syracuse, NY, Noelle A. (Jim) Torok of Grove City, Lori E. (Butch) Undercuffler of Parker, Christopher J. (Christina) Wagner of McMurray, Matthew T. (Kimberly) Wagner of East Stroudsburg, and Allison A. (David) Straussman of Evanston, IL.; thirteen grandchildren: Alec, Evan, Kyle Sheridan, Porter, and Aidan Wagner, Lily, Eloise, Zachary, and Eli Meszaros, and Kaitlin, Madison, and Daniel Torok; one brother and wife: John "Jack" (Billie) Crowley of Frankenmuth, MI.; two brothers-in-law: Robert Parenti of Parker and Donald Popovitch of Mt. Lebanon, Pa.; number of nieces and nephews. In addition to his parents, he was preceded in death by a sister, Kathy Wagner Parenti. Friends may call from Noon to 2:00 PM Saturday at H. Jack Buzard Funeral Home, 201 So. Wayne Ave., Parker where funeral services will be held at 2:00 PM. Burial will be private at Larry's request. To view/send condolences, sympathy cards, flowers, visit www.buzardfuneralhomes.com In Lieu of flowers, the family suggests memorials to The Caring Place in Franklin, Pa. 16232. Members of VFW and American Legion of Parker will conduct a Veteran Memorial Service at 2:00 PM Saturday in the funeral home.

LARRY E. WAGNER, 72, of Miller's Eddy, Parker, Pa. passed away at 11:47 PM Monday evening at the Caring Place in Franklin following a several month illness. Born on March 12, 1940 in Parker, Pa., he was the son of the late George "Buss" and... View Obituary & Service Information

The family of Larry E. Wagner created this Life Tributes page to make it easy to share your memories.

Send flowers to the Wagner family.