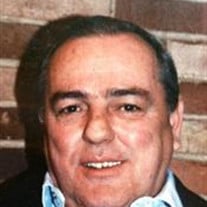 Larry W. "Pep" Simpson, 71, of Doc Walker Road, Parker, passed away at 2:00 p.m. February 13 at his home. Born September 21, 1940, in Kissinger Mills (Clarion Co.), he was the son of the late Bruce and Mary (Gorman) Simpson. He was a 1958 graduate of Sligo High School in the Union Joint District. Pep was an avid softball player, hitting many home runs for the Tootsie Roll Inn of East Brady. He also played for Nick's, Savelli's, and the Parker Depot softball teams. In the early 90s, he and Larry Smith formed a softball team "Smith's & Pep's". He was employed by Clarion County PennDot for 25 years, as a laborer, foreman, and Assistant County Superintendent, retiring in 1989 due to disability. He then worked as a Consultant on I-79 in Cranberry Township, Butler Co., for Edward Anthony Associates. From 1990 to 1994 he owned the former "Pep's Place" in Rimersburg. Pep was a lover of country music. In his early teens, he and his brother Jim sang on the Kittanning Radio station, and he later sang with Jim's band. Beginning in the 70s, he sang for many years with Phil Bowser and "The Country Sounds" band. He also sang and played the keyboard for several clubs, private parties and benefits, and later did the same with Karaoke. He was a social member of the Rimersburg VFW Post 7132, the Brady's Bend American Legion Post 488, and the Clarion Co. Rod & Gun Club of Knox. On April 4, 1980, he married Elaine (Callander) Freeberg, who survives. In addition to his wife, he is survived by a son Larry "Bart" Simpson and his wife Lynn of Bradford, and their children Jalon and Noah; and a daughter Lisa Fiscus and her husband Ben of Callensburg, and her children Jessica (Richard) Sipes of Strattanville and their son Deacon, and Brittany (Toby) Best of Clarion and their daughter Olivia. He is also survived by three step-children: Scott Freeberg of Houtzdale; Mary Beth (Mark) Conner of St. Petersburg, and their children Mitchell, Marissa, Matthew, Mikey and Malia; and Wendy (Darrick) Stewart of Sligo and her son Dylan Griffin and step-son Damon Weaver; and his Boston Terriers, Jake and Josie. Mr. Simpson is also survived by two brothers: Eugene of Butler and John of Huey; and four sisters, Gail Maxim and her husband Eddie of Youngstown, OH; Becky Sleigher and her husband Jim of Kissinger Mills; Carol Clark and her husband Edward of Sligo; and Linda Ganoe and her husband Bernie of Clarion. In addition to his parents who died in 1976, he was preceded in death by five brothers: Edward, Billy, James, Eric and Junior Bruce; and three sisters, June Divins, Peggy Lou Simpson, and Sally Kriebel. Friends may call from 2 to 4 and 6 to 8 p.m. Wednesday and Thursday at the H. Jack Buzard Funeral Home in Parker. Visitation will also be from 1 to 2 p.m. Friday at the United Methodist Church in West Freedom; funeral services will be conducted at 2 p.m. by Reverend Bessie Maihle, retired Methodist Minister, officiating. Interment will follow in the Rimersburg Cemetery. Memorials may be made to the United Methodist Church, C/o Joyce Rupert, 5202 Lime Plant Road, Parker, PA 16049 or the Clarion Cancer Center, 150 Doctor's Lane, Clarion, PA 16214.

The family of Larry "Pep" Simpson created this Life Tributes page to make it easy to share your memories.

Send flowers to the Simpson family.