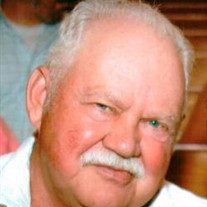 LARRY C. CRATTY, 71, of Parker passed away Saturday (02-22-14) at VNA In-Patient Hospice of Butler following a several months illness. His death came one day following his 71st birthday. Born in Foxburg on Feb. 21, 1943, he was the son of the late Harry "Whitey" and D. Virginia Cope Cratty. Larry was a graduate of ACV High School in Emlenton in 1961 and a graduate in draftsmanship from Triangle Tech of Pgh. He had been employed over the years by L. Taylor Engineering of Clarion, Wise Engineering and Armco, both of Butler. He designed the swimming pool still in operation at the Gaslight Campground near Emlenton. He and his wife, Diann Craig Cratty, owned and operated the Parker House Hotel (Cratty Shack) for a total of over twenty years. Larry was a member of the former Rotary Club of Parker, now PACSO, for many years. He was also a lifetime member of the ACV Sportsmen Club in Perry Twp., and was a member of the Rod and Gun Club of Knox. He was a social member of the VFW at Parker and Hilliards. Larry and Diann were active associates of the businesses of Parker in support of the Polar Bear Plunge on New Years Day and raising funds for the annual fireworks display on Community Day in Parker. Surviving are his wife, the former Diann Craig whom he married August 25, 1962 in Winchester, Va.; one daughter, Melinda (Eric) Eiler of Parker; three sons: Kenneth Cratty of Parker, Doug (Carla) Cratty of Evans City, and Travis (Sally) Cratty of Parker; ten grandchildren: Kelsey, Kayla, Rebecca, Jordan, Leroy, and Austin Cratty, Hollie Sutton, Brandon Eiler, Jessica McCorkle, and Brittany Boyle; two great-grandchildren: Brady Eiler and Brenna McCorkle; one sister, Joyce (Jack) Chambers of Parker; two brothers: Charles Thomas (Kathy) Cratty of Parker, and Harry (Emma) Cratty of Emlenton; also several nieces and nephews; his mother-in-law, Garnet Craig of West Monterey. In addition to his parents, he was preceded in death by a sister, Judy Cratty, a brother, Russell Cratty, and an infant sibling. Friends may call from 2:00 to 8:00 PM Tuesday at H. Jack Buzard Funeral Home, 201 So. Wayne Ave., Parker. Funeral services will be conducted at 11:00 AM Wednesday in the funeral home. Interment in Parker Presbyterian Cemetery. The family suggests memorials to VNA In-Patient Hospice, Benbrook Rd., Butler, Pa. 16001.

LARRY C. CRATTY, 71, of Parker passed away Saturday (02-22-14) at VNA In-Patient Hospice of Butler following a several months illness. His death came one day following his 71st birthday. Born in Foxburg on Feb. 21, 1943, he was the son of... View Obituary & Service Information

The family of Larry C Cratty created this Life Tributes page to make it easy to share your memories.

Send flowers to the Cratty family.