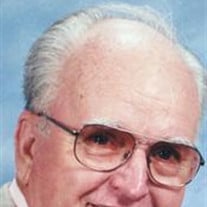 LAIRD R. IRWIN, 83, of Fairview Twp., Petrolia passed away late Monday afternoon at Parker Personal Care Home following an illness. Born at Kepple's Corners on August 28, 1929, he was the son of the late David C. and Iola Ruth Reep Irwin. Graduating from Fairview Township-Karns City High School, he began a lifelong career in the electrical utility service. He was employed over fourteen years with West Penn Power. Later he began a twenty-six year career with Central Electric Co-Op of Parker, from where he retired. Laird was a member of the Fairview Presbyterian Church. He was a member and past worshipful master of Parker City-Allegheny Valley F. & A.M. Lodge #521 of Parker and the Coudersport Consistory. Surviving are a son, Dayne Irwin, a daughter-in-law, Cindy Romo Irwin, three grandchildren, Shardae, Chaz, and Chase Irwin, and great-grandson, Lane Irwin, all of the Petrolia area; one sister: Betty Parker Hilliard of North Carolina, and a number of nieces and nephews. In addition to his parents, he was preceded in death by wife, Jean M. Schick Irwin, a son, Larry, a sister Ann Geibel, and two brothers, David "Bus" and John Irwin. Friends may call from 2-4 and 6-8 PM Thursday at H. Jack Buzard Funeral Home, 201 So. Wayne Ave., Parker. Funeral services will be held at 10:00 AM Friday in funeral home with Rev. Bob Miller officiating. Burial will follow at Bear Creek Cemetery in Petrolia. Members of PC-AV Lodge 521 will conduct memorial services at 6:00 PM Thursday in the funeral home.

The family of Laird R. Irwin created this Life Tributes page to make it easy to share your memories.

Send flowers to the Irwin family.