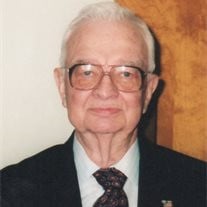 Lewis A. Witherup, 94, of Parker passed away Tuesday morning at 3:45 AM at Parker Personal Care Home. Born in Raymilton, Pa (Venango Co.) on January 31, 1924, he was the son of  the late Martin H. and Jessie N. Sweetapple Witherup. A graduate of former Emlenton High School in 1942, he immediately began a career with former Quaker State Refinery at Emlenton as a laboratory assistant. He transferred to Quaker State Research Center in 1967, and retired in 1986 as research specialist. While at Q.S., he completed many courses with Penn State Univ. in the field of petroleum research and engineering. He entered active service in WWII with U.S. Army from  June 30, 1944 to May 31, 1946 being honorably discharged with rank of Staff Sergeant. Wounded in Germany on February 4, 1945, he recuperated and returned to duty. He was awarded the Purple Heart as well as numerous other ribbons including the Combat Infantry Badge while serving with the Fourth Infantry as well as the Seventh Army. Lewis was a member of Perryville United Methodist Church since 1950 having served as Sunday School Teacher, Administrative Board Chairman, Trustee, PPR Committee, and Lay Leader. He also sang in the choir for years, and for a long time period was the only male member of choir. He operated Witherup Supply Co. beginning in 1967 from his home, selling Shooters’ supplies and repairing firearms. He enjoyed reloading ammo, hunting, and serving his customers. He was a member of long tenure (69 years and 11 months) of Parker Allegheny Canby Lodge #521 and New Castle Consistory. He was a longtime member of the American Legion Post 598 of Parker. Lewis is survived by, Son, Terrence L. Witherup of Simpsonville, KY.; two grandchildren, Chelsea and Ethan Witherup of Asbury, NJ.; one step-grandchild, Lucia Thompson of Asbury, NJ. He was preceded in death by his wife, Ruby B. Stewart Witherup whom he married October 20, 1950 and who passed February 19, 2011. In addition to his parents, he was preceded by Son, Keith M. Witherup in 2014. Friends may be received from 2-4 and 6-8 Thursday (June 7) at the H. Jack Buzard Funeral Home, 201 Wayne St., Parker. Funeral Services will be at 11:00 AM Friday (June 8) at the funeral home with ret. Rev. Dan Myers officiating. Interment will follow at Perryville Cemetery. A Veteran’s service will be held at 10:45AM Friday at the funeral home.

Lewis A. Witherup, 94, of Parker passed away Tuesday morning at 3:45 AM at Parker Personal Care Home. Born in Raymilton, Pa (Venango Co.) on January 31, 1924, he was the son of  the late Martin H. and Jessie N. Sweetapple Witherup. A graduate... View Obituary & Service Information

The family of LEWIS A. WITHERUP created this Life Tributes page to make it easy to share your memories.

Lewis A. Witherup, 94, of Parker passed away Tuesday morning...

Send flowers to the WITHERUP family.