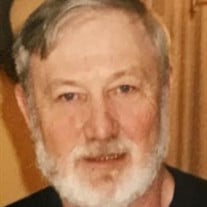 LARRY PAUL SNYDER, 71, of Eau Claire passed away at 10:30 PM Saturday evening (03-31-18) at Butler Memorial Hospital following an illness. Born in Butler, Pa. on September 8, 1946, he was the son of the late John W. and Cora Stalker Snyder. Larry married the former Jeanette DiGiammarino on Sept. 12, 1970, and she survives. He served in the United States Army from October 1965 through January 1967. Serving in Viet Nam with the 137th Engr. Co., 18th Bn., 19th Brigrade,, he attained the rank of SP/4, and earned the NDSM and the Vietnam Service Medal. Over the years, he and his wife attended many of the 137th Engr. Co. Reunions, held mostly at Ft. Riley, KS.  He was a life member of VFW Post 7840 and American Legion Post 945. Larry was a heavy equipment operator most of his adult life working for several operations, but well known at Adobe Coal Co., and later with Dick McCall Inc. of Petrolia from where he retired with over fifteen years service. He was Catholic by faith, and was a devoted family man, especially enjoying time spent with his four grandchildren and attending their school activities. In addition to his enjoyment as a fisherman and hunter, he was a founding member of the Clarion County BassMasters. He was a member of Parker City-Allegheny Canby F. & A.M. Lodge #521 of Parker. Everyone in the area that knew Larry knew of his natural ability and love to create outstanding vegetable and floral garden gardens each years. In addition to his wife, he is survived by one daughter and husband, Regan and Chad Grossman of Slippery Rock; two sons Larry Paul, Jr. and Tyrone Snyder, both of Eau Claire;  four grandchildren:  Tyce Snyder, Collette, Ryley Chad, and Molly Grossman;  five sisters:  Phyllis Tinker of Seneca, Barbara Kellerman of Eau Claire, Mary (David) O’Donnell of Marietta, GA., Jean (Dave) Druzisky of Cape Coral, FL., and Carol Snyder of Ft. Myers, FL.; one brother: Fred (Patti) Snyder of Ft. Myers, FL., and many nieces and nephews. In addition to his parents, he was preceded in death by two brothers, Robert L. and David Snyder. In lieu of flowers, the family suggests memorials to Clarion Co. BassMasters, c/o Thomas “Tom” Jackson, Jackson St., Parker, Pa.  16049.

LARRY PAUL SNYDER, 71, of Eau Claire passed away at 10:30 PM Saturday evening (03-31-18) at Butler Memorial Hospital following an illness. Born in Butler, Pa. on September 8, 1946, he was the son of the late John W. and Cora Stalker Snyder. Larry... View Obituary & Service Information

The family of LARRY PAUL SNYDER created this Life Tributes page to make it easy to share your memories.

Send flowers to the SNYDER family.