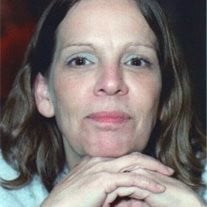 Kathleen "Kathy" Joyce Karns Merwin, 57, of Parker, PA., passed away at her residence, surrounded by her family on April 29, 2018. Kathy was born in Franklin, PA on November 7, 1960. She was the daughter of Thomas Karns Sr., who survives and the late Sally Rumberger Thomas. She graduated from the AC Valley High School in 1979. She was married to William "Bill" Merwin who survives on July 4, 1992 at the Perryville United Methodist Church by the Rev. Glea Foster. Kathy was an administrator/coordinator for nearly 20 years with Gardenscape in Emlenton, PA. She loved to read Nora Roberts and Janet Evanovich novels. She had a fondness for bird watching, fishing and spotting deer. Kathy loved spending time with her grandchildren and attending her family gatherings. One for puzzles, she loved playing hidden object games. Kathy also enjoyed yard sales, flea markets and collecting paper weights. She drank red rose tea everyday and enjoyed collecting the nicknacks that came in the packages. She was also proud that she quit smoking in 2013. In addition to her husband Bill and her Father Tom, Kathy is survived by Her Three daughters: April (Danny) Wolfe of Parker, PA; Brittany (Joey) Shay of Kelso, WA.; and Cassie Merwin of Parker, PA.  Two sisters: Kim (Ron) Dennis of Dallas, PA; Karen (Sylvan) Landers of Oil City, PA. Three Brothers: Tom (Connie) Karns Jr of Harrisville, PA.; Sam (Sarah) Thomas of Brattleboro, VT: and Shelby (Amanda) Karns of Erie, PA. Her grandchildren: Katelyn and Holten Wolfe of Paker, and Alesana and Layne Shay of Kelso, WA. As well as her mother in-law Gloria Merwin., Two Brother in-laws; One Sister on-law, and numerous nieces and nephews. In addition to her Mother, she was preceded in death by a Brother in-law. Friends will be received at the H. Jack Buzard Funeral Home (201 S. Wayne St.) Parker, PA on Wednesday the 2nd from 3-5pm & 7-9pm. The funeral service will be held at the Funeral Home on Thursday the 3rd at 11am. Interment will follow at the Perryville Cemetery near Parker.

Kathleen "Kathy" Joyce Karns Merwin, 57, of Parker, PA., passed away at her residence, surrounded by her family on April 29, 2018. Kathy was born in Franklin, PA on November 7, 1960. She was the daughter of Thomas Karns Sr., who survives and... View Obituary & Service Information

The family of Kathy Joyce (Karns) Merwin created this Life Tributes page to make it easy to share your memories.