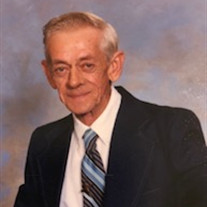 KENNETH G. KRIESS, Sr., 87, of Grove City passed away Saturday (05-19) at Avalon Springs, Mercer, Pa. following an extended illness. Born in Connoquenessing Two., Butler Co., Pa. on August 15, 1930, he was the son of the late George L. and Florence Phillips Kriess. Ken was married to the former Bonnie Montgomery at the Bethel United Methodist Church in Eau Claire on March 9, 1957 and  she survives. Ken was an Honorably Discharged veteran of the United States Army Reserves serving from 1949 to 1956 including reserve status. He was employed as a heavy equipment operator most of his adult life.  In early years he was employed by Heckett Engineering of Butler, and later by John Alexander Mill Service of Prospect, from where he retired. He was a former member of St. John’s Reformed Church at Meridian. Surviving in addition to his wife are three children:  Imogene Renee (Nick) Kaufman on Andover, MN., Kevin A. Kriess of Zelienople, and Kenneth G. (Tracy) Kriess, Jr.;  five grandchildren and a number of nieces and nephews.  Also survived by a sister, Donna Hobaugh of Butler. In addition to his parents, he was preceded in  death by an infant daughter, infant brother and sister, brother Fred L. Kriess, sisters Esther Kriess, Grace Gould, Mary Going, Betty Simons. Friends may call 2:00 to 5:00 PM Saturday (May 26) at H. Jack Buzard Funeral Home, 201 So. Washington St., Eau Claire where a funeral service will be held at 5:00 PM in the home. In lieu of flowers, the family suggests memorials in Ken’s memory to the Bethel United Methodist Church, % Mrs. P. Montgomery, PO Box, Eau Claire, Pa.  16030.

The family of KENNETH G KRIESS created this Life Tributes page to make it easy to share your memories.

Send flowers to the KRIESS family.