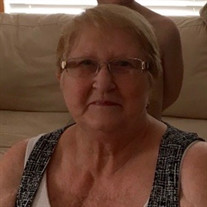 Judith Ann McIntyre Wright, age 74, of Parker, PA passed away early morning of Tuesday, April 4 th , 2017 at the VNA Inpatient Hospice Center in Butler, PA after a courageous battle with cancer. Judy was born in Hillville, Armstrong County on March 1, 1943. She was the daughter of the late Guy A. McIntyre and Dorothy R. Barger McIntyre (Crissman). A graduate of the Karns City High School class of 1961, she became the first female paramedic in Butler County where she was employed for over ten years. Later in her career she became a secretary for the Chicora Medical Center. Judy married Martin Wright on October 1, 2003, who survives. Judy looked forward to family gatherings when they could all be together. Being a mother and grandmother was a proud achievement and her love for them is eternal. She was a member of the Lioness Club of Petrolia and also was an adventurer who loved being outside, especially on the water. She loved to canoe, hike, go camping and spending time fishing. She had a fondness for camping in Canada and was proud that she made it to the Canadian National Expo. In addition to her husband Martin, she will be deeply missed by her one and only daughter, Tina Louise Stewart and husband Eric of Petrolia, PA; Four sons, Timothy Lee Lipinski of Brady’s Bend, PA; Thomas Michael Lipinski and fiancé’ Susan Kochan, of Key West, FL; Robert James Lipinski and wife Monalie of Los Angeles, CA; Scott Matthew Lipinski and wife Kirsten of Orlando, FL; Three step children, Renee Diana Michaud and her husband John of Boston, MA; Rachel Lee Cumberland and husband Brad of Rimersburg, PA; and Jennifer Ann Wright of Deerfield, IL; 17 Grandchildren; Two brothers, Dale McIntyre of Punxsutawney, PA; David McIntyre of Butler, PA and numerous nieces and nephews. Judy was preceded in death by her parents, and two brothers, Charles and Robert McIntyre.

The family of Judith Ann (McIntyre) Wright created this Life Tributes page to make it easy to share your memories.