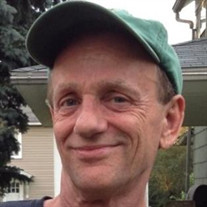 John C. Simpson, Jr., age 65, passed away peacefully at his home on March 18, 2021, following a brave battle with cancer. He was a loving father, son, brother, grandfather, and friend. Born on March 12, 1956, in Clarion, John was a longtime resident of St. Petersburg. After graduating from Union High school, John entered the United States Air Force and spoke proudly of his service throughout his life. He was a lighthearted man who enjoyed life’s simple pleasures, especially spending time outdoors. A lifelong hunter and fisherman, and a talented gardener, he was happiest when surrounded by nature. John blessed his children with his appreciation for nature and leaves them with many happy memories of weekends spent camping, boating, and fishing together. Whether listening to rock and roll music or lovingly preparing a hearty breakfast for his family, John had a talent for helping others slow down and appreciate the beauty in ordinary moments. John is survived by his son John (Breane) Simpson. His daughter Emily (Vincent) Bauters. His father, John C. Simpson Sr.; Two brothers; Larry “Squirrel” (Tina) Simpson and David “Bruce” Simpson, and a sister; Pamela Simpson. He is also survived by his grandsons, Camden and Reece. Additionally, his memory lives on through his three nieces, one nephew, and eight great-nieces and nephews, aunts, uncles, as well as his beloved friends. He was preceded in death by his mother, Betty B. Simpson, his brother, Daniel DeRita, and his nephew, Joshua Simpson. Friends will be received at H. Jack Buzard Funeral Home in Parker, Pa. (201 S. Wayne Ave.) on Monday, March 22, 2021, from 2-4, and 6-8 pm. A funeral service will be held on Tuesday, March 23, 2021, at 11:00 am, followed by a burial at Perryville Cemetery. CDC and Dept. of Health guidelines will be followed. In lieu of flowers, memorial donations may be made in John’s honor to a Veterans Organization of your choosing.

John C. Simpson, Jr., age 65, passed away peacefully at his home on March 18, 2021, following a brave battle with cancer. He was a loving father, son, brother, grandfather, and friend. Born on March 12, 1956, in Clarion, John was a longtime... View Obituary & Service Information

The family of John Clay Simpson Jr. created this Life Tributes page to make it easy to share your memories.

Send flowers to the Simpson family.