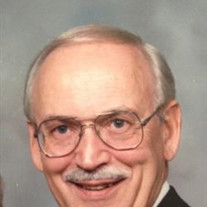 JOHN E. "Jack" CROWLEY, 80, of Frankenmuth, Mich., formerly of Parker, Pa., passed away Tuesday afternoon (02-25-14) at Covenant Medical Center in Saginaw, MI. following a brief illness. Born in Oil City, Pa. on Jan. 4, 1934, he was the son of the late William F. Crowley and the late Rose Marie Lange Crowley Wagner. "Jack" was a proud veteran of the U.S. Army being honorably discharged with the rank of sergeant on Sept. 30, 1962. Mr. Crowley was employed as an engineer in the tooling industry most of his adult life, with his last employment in the field of robotics. Surviving are his wife, Marian Richardson "Billie" Crowley, one daughter Lee and husband Len of Colorado, two sons Patrick of Michigan and Daniel and partner Robyn of Colorado; also four grandchildren: Jack, Emily, Erin and Lauren; one great-grandchild, Adrienne; also several nieces and nephews. In addition to his parents, he was preceded in death by a sister, Kathy Wagner Parenti and a brother, Larry Wagner. As per Jack's wishes, there will be no visitation or funeral service at the present time. A Celebration of Life will be held in Parker, Pa., his hometown, in the Spring of 2014.

The family of John E Crowley created this Life Tributes page to make it easy to share your memories.

Send flowers to the Crowley family.