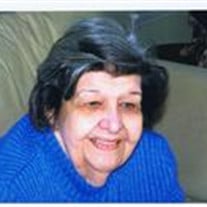 JANICE L. ALTMIRE, 89, of Golden Living Center, Shippenville, formerly of Emlenton and Parker, passed away Saturday morning (02-02-13) at the center of natural causes. Born in Salem Twp., Clarion Co. on April 24, 1923, she was the daughter of the late Charles Alvin and Florence M. Master Ritts. She was married to Frank H. Altmire on Nov. 7, 1941 and he passed away Feb. 12, 1980. Jan was a longtime member of the former St. Mary's Catholic Church and the Altar Rosary Society at Parker. She was employed over fifteen years at the former Moyer Level Works, and later employed as a bus driver for many years with the former Altmire School Bus Line, both of Parker. Jan was an avid bowler, and held many trophies from different leagues which she belonged. Surviving are a son and his wife, Charles "Chuck" and Lori Sue Altmire of Seneca, Pa.; granddaughter and husband, Monica and Marker Barner of Youngstown, NY; grandson and wife, Douglas and rose Altmire of Saxonburg, Pa.; three great-grandchildren; five sisters: Bonnie Jack of Emlenton, Patricia (John) Knoll of Butler, Margaret Chadman of Lamartine, Linda (Richard) Rowe of Penn State, and Jean (Ed) Ausel of Knox; three brothers and a special nephew reared as a brother: Joe (Ellen) Ritts of New York, Roger (Dolores) Ritts of Knox, Allen Ritts of Lamartine, and Robert (Sonya) Ritts of Emlenton; number of nieces and nephews. In addition to her parents and husband, she was preceded in death by two sisters: Wanda Vansteenberg and Zella Robertson. Friends may call from 2-4 and 6-8 PM Tuesday at H. Jack Buzard Funeral Home, 201 So. Wash. St., Eau Claire where a Blessing Service will be held at 8:15 PM in the funeral home. Private burial will be held at 10:00 AM Wednesday in the Eau Claire Cemetery.

JANICE L. ALTMIRE, 89, of Golden Living Center, Shippenville, formerly of Emlenton and Parker, passed away Saturday morning (02-02-13) at the center of natural causes. Born in Salem Twp., Clarion Co. on April 24, 1923, she was the daughter... View Obituary & Service Information

The family of Janice L Altmire created this Life Tributes page to make it easy to share your memories.

Send flowers to the Altmire family.