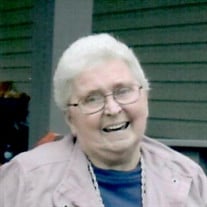 Janet F. Rose DeHart, 86, of Emlenton, passed away early Sunday morning (5-16-21) at Clarview Nursing and Rehabilitation Center in Sligo following a period of declining health. Born in Dutch Hill (Perry Twp.) Pa. on August 20, 1934, she was the daughter of the late William and Martha Stewart Rose. She was a 1952 graduate of the former Parker Area High School and attended Clarion State Teachers College (now University). Janet was baptized and a lifelong member of Concord Presbyterian Church (Perry Twp.) and was an Elder of the church. At her passing, she was also a member of Salem Reformed United Church of Christ at Lamartine. Voting in every election since age twenty-one including the 2021 election by proxy ballot as a Republican, she had served on the Board of Election in Perry Twp., and later on the Richland Twp. Board of Election (Venango Co.). An active community member wherever she resided, she was a member of DeHart-Rossman Ladies Auxiliary of American Legion and the Richland Grange. Janet served as a school bus contractor/driver with the Allegheny-Clarion Valley School District, and as well as a School Board Director with the same district for many years. Surviving are a daughter Joyce (Randy) Aughton of Emlenton; two sons: Jeff (Gail) Pipher of Parker and Gerald (“Punk”) Pipher of Battle Creek, MI.; also survived by several grandchildren, great-grandchildren, nieces, and nephews ; three step-children: David (Donna) DeHart of Wisconsin, Bryan (Jill) DeHart of Beaver, and Brenda (Michael) Motto of New Castle. In addition to her parents, she was preceded in death by her husband Thomas L. DeHart who passed away November 13, 2009. She was also preceded in death by sister Virginia Rose Campbell and brother William S. Rose. Visitation 2-4 and 6-8 Wednesday at H. Jack Buzard Funeral Home, 201 So. Washington Ave., Parker. Memorial Service only at 11:00 AM Saturday, May 22, 2021, at Salem Reformed United Church of Christ (Lamartine-Clarion Co.) with Pastor Chris Lewis, church pastor officiating. In lieu of flowers, the family suggests memorials to Salem Reformed United Church of Christ, P.O. Box 238, Lamartine, Pa. 16375.

The family of Janet F. DeHart created this Life Tributes page to make it easy to share your memories.

Send flowers to the DeHart family.