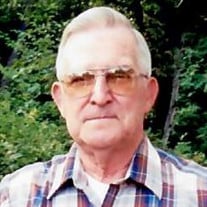 James D. Wade, 90, of Eldorado, Parker, Pa. passed away Weds. afternoon at his residence following an illness. Born in Hilliards, Butler Co. on October 27, 1929, he was son of the late Harry and Irene Moyer Wade. He was married Aug. 19, 1950 to the former Mary Rosella Alworth who passed away Mar. 22, 2013. Jim was owner-operator of Wade Disposal Service of Eldorado-Parker from where he retired following many years of service. He was a member of Robinson Chapel Church near Parker. Mr. Wade served years as a Special Deputy Sheriff in Butler County as well as a Pennsylvania State Constable. With many talents, Jim was an active airplane pilot, operator of heavy equipment (especially D-8 and D-9 dozers), and very mechanically inclined when repairing automobiles and other motor driven equipment. Though never having formal music lessons, he was well known for his ability to pick up a guitar or sit down at an organ and play a variety of music. He loved campfire cooking, spending time with his family, and drinking coffee with friends at local restaurants. As weather permitted, he could be found on the front porch swing awaiting the day’s sunset. Surviving are three daughters: Cheryl “Cher” Howard of Eldorado, Susan Saidy of Houston, TX, and Tracey (Kirby) Stalker of Boyers; three grandchildren: Jason Howard, Eric (Krista) Stalker, and Heather (Jeremy) Bean; two great-grandchildren: Hailey Jo Howard and Logan Stalker; one sister: Mrs Velma “Jean” Deets of Utica, Pa., and a number of nieces and nephews. In addition to parents and wife, he was preceded in death by two sisters Mary and Mae, and four brothers: Roy, Bob, Don, and Chuck. Visitation 2-4 and 6-8 Saturday at H. Jack Buzard Funeral Home, 201 So Wayne Ave., Parker where funeral services will be held at 2:00 PM Sunday. Private burial Monday morning at 9:30 AM at Allegheny Cemetery near Parker.

James D. Wade, 90, of Eldorado, Parker, Pa. passed away Weds. afternoon at his residence following an illness. Born in Hilliards, Butler Co. on October 27, 1929, he was son of the late Harry and Irene Moyer Wade. He was married Aug. 19, 1950... View Obituary & Service Information

The family of James D Wade created this Life Tributes page to make it easy to share your memories.

Send flowers to the Wade family.