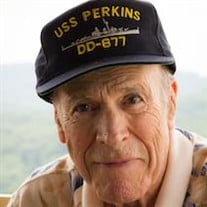 JAMES GATES EDMONDS, 91, of Parker, Pa., passed away April 22, 2019 at Newhaven Court at Clearview of Butler. He was born July 7, 1927 in Bruin, PA., the son of William W. and Margarite (Gates) Edmonds. James graduated from Bruin High School in 1945 and received a bachelor’s degree in chemistry from the University of Pittsburgh in 1952. He honorably served as a member of the US Navy during WWII. James worked as an analytical chemist and foreman at the former Koppers for 16 years, and then spent an addition 16 years at Indspec. He was a longtime member of both the Faith Community Church and the Bruin Volunteer Fire Department and enjoyed volunteering at bingo night. James lived in the area all his life except for a few years spent in Florida and Rock Hill, SC before moving to Parker. Family was extremely important to him and he loved taking walks and ice skating with them in his younger days. He cherished the time spent with his children, grandchildren, and great grandchildren. His family and friends will always remember his kind, gentle, and loving spirit. He is survived by his sons, Larry L. Edmonds and wife, Donna of Parker and Rex W. Edmonds and wife, Joetta, of West Sunbury; daughters, Amy Peters and husband, Dennis, of Bruin and Judy Holtz, of Florida; grandchildren, Daniel, Jacob, Allison, and Adam Edmonds, Benjamin and Ted Peters, and great-grandchildren, James William and Klara Jane Edmonds. James was preceded in death by his parents; first wife, Clara Mae (Schnell) Edmonds, whom he married December 25, 1949. Clara passed November 9, 1991; He was preceded by his second wife, Birdie Lou (Slagle) Horneman-Edmonds, whom he married on December 7, 1996. Birdie passed on February 1, 2010; and his brother, Richard W. Edmonds. Friends will be received from 2-4 and 6-8 PM on Friday, April 26, 2019 at H. Jack Buzard Funeral Home in Parker (201 S. Wayne Ave). Funeral services will be held at 11 AM on Saturday, April 27, 2019 at Faith Community Church, 143 Main Street, Bruin, with Pastor Floyd Barnhart officiating. Burial will be at Bear Creek Cemetery of Petrolia.

The family of JAMES GATES EDMONDS created this Life Tributes page to make it easy to share your memories.

Send flowers to the EDMONDS family.