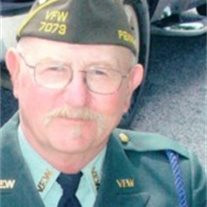 Jack “Clint” Sefton, 67, of Parker, Pa. passed away early Friday morning at VNA-In-Patient Hospice at Butler following an extended illness. Born in Butler on May 4, 1948, he was son of the late John D. and Priscilla Alice Roberts Sefton. Jack was a graduate of Karns City High School, and shortly thereafter enlisted in the U.S. Army from which he was honorably discharged with rank of SP/5.  Serving two tours of duty in Viet Nam,  he earned the Expert Badge M-14, Viet Nam Service Medal, Viet Nam Campaign Medal with 2 O/S Bars, and the NDSM. He served with the 687th Landclearing Unit. Jack was a member of the VFW and American Legion Posts of Parker. He retired from Penreco (Calumet) in Karns City in 2012 with thirty-nine years of service, much of that  time as a machinist. He loved working on his farm, raising cattle, and teaching his children and grandchildren about farming and life itself.  Jack was an individual who could not pass a tractor on sale without stopping to view and question sale price. Loving the outdoors, he and his wife spent forty years hunting on the beloved farm. He was a committed husband, father, grandfather, brother, and friend to many, especially those in need. He was a genuine “Mr. Fix-It”. He was a member of Holy Trinity Lutheran Church of Chicora. He is survived by his wife, the former Bonnie Daubenspeck whom he married August 7, 1975.  Surviving are two children, Amanda Sefton of Parker, and Tyler (Nicolle) Sefton of Unionville’ two grandsons: Dayne Sefton-Marcucci and Jack P. Bixler; brother Merle (Mary) Sefton of Butler and sister Marlene Sefton Michael of Twinsburg, OH.; number of nieces and nephews. In addition to his parents, he was preceded in death by sisters Donna St.Cyr and Lois Meyer and two infant brothers.

Jack &#8220;Clint&#8221; Sefton, 67, of Parker, Pa. passed away early Friday morning at VNA-In-Patient Hospice at Butler following an extended illness. Born in Butler on May 4, 1948, he was son of the late John D. and Priscilla Alice Roberts... View Obituary & Service Information

The family of Jack "Clint" Sefton created this Life Tributes page to make it easy to share your memories.

Send flowers to the Sefton family.